Lions hold off the Steers for Homecoming win 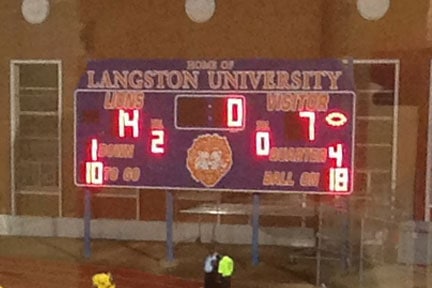 Langston – Earl Horton’s interception at the goal line on the game’s final play salvaged the victory for Langston on Homecoming night.  The Lions defeated Texas College, 14-7, in a game affected by the rain that soaked the campus throughout the day.

The Lions were able to hang their hats on the play of the defense and special teams.

In a battle of field position throughout the night, Langston (4-3, 3-0 CSFL) kept the game on TC’s end of the field the entirety of the first quarter.  The Lions then blocked a punt late in the quarter and Chace Green ran it 25 yards and in for the score.

Langston quarterback Jac’Quon Miles finally found some rhythm in the second stanza. He  hooked up with Leonard Cook for a 69-yard touchdown pass, giving the Lions a 14-0 advantage going into intermission.  But that would be the final time the Lions would score.

Ivory Cook and Will Taylor combined for 88 yards rushing on 24 attempts for the Lions.  LU controlled the clock, but couldn’t put any more points on the board.

Texas College (1-6, 1-1 CSFL) receiver Kevan Hill had a breakout night with seven receptions, matching his season total coming in, including a 15-yard touchdown grab to bring the Steers to within a score in the fourth quarter.

But the Lion defense held on Texas College’s final drive.  The Steer moved the ball to the Langston 18 with two seconds left.  The LU defense pressured freshman Steer QB Milton Harper as forced up one last pass.  Horton stepped into the passing and picked off the throw at the goal line to seal the game as time expired.

Langston coach Mickey Joseph said that the offense didn’t play well throughout the night, but the defense did what was necessary, even though his players were starting to tire at the end.

“The offense didn’t stay on the field long enough (in the second half),” Joseph said.  “And the defense was getting wore down having to be out there so much.  But they hung on and got it done.”

Langston has won three straight and will travel to McMurry on Oct. 27.