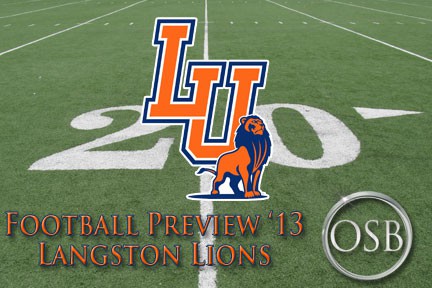 Since taking the helm of the Langston Lions’ football program, head coach Dwone Sanders has had his players thinking of one place: Rome.

Rome, Ga., that is.  It’s the city that will host the NAIA national championship game.

And Sanders said he is excited about what he believes his players can accomplish this season.

“We are putting in the work and the guys are responding,” Sanders said.  “And our goal, like everyone else’s in the country, is to win the national title.

It’s a program that has been headed in the right direction of late to achieve that goal.  The Lions were 6-4 in 2012 and 7-3 in 2011, and each season taking the Central States Football League crown.

LU is the favorite to repeat that feat and took six of the nine first-place votes in the league’s poll.

The Lions were also in at No. 23 in the NAIA preseason poll, which came out Monday.

There are tough games on the slate once again to prepare the team for the CSFL portion of the schedule.  The Lions are on the road again this year seven times, with two games at NCAA FCS schools, Nicholls State and Northwestern State.

But Sanders knows that to get to that next level, there are still adjustments that need to be made.  The offense has underperformed recently with team and individual numbers that are less than stellar.  And Langston topped the NAIA last season in penalty yards.

“We’ve been working on structure.  And we’re taking care of the little things.”

The Lions’ success on offense will go through the senior quarterback Jac’Quon Miles.

“Jac’Quon has matured and developed and he’s making great decisions,” Sanders said.  “This year, we would like to move the ball around, but we want to establish a running game.”

Will Taylor will be one of the backs featured in that ground game.  The senior averaged 45 yards per game in 2012 and is poised to break out with Sanders wanted to present an offense that is more “power” than “finesse.”

However, the Lions have a number of capable receivers in the fold.  Langston returns two of its top three receivers from 2012, who were freshman a year ago.  Sheldon Augustine and Ashphenn Gaines are ready targets for Miles to find.  Junior transfer from Arkansas, Cordara Frazier, should also have a big impact with his 6-4, 215-pound frame.

The defense has been strong at Langston and seems to be only getting stronger.

“Our guys have bought in and know that we play great defense here at Langston,” Sanders said.  “And they are working extra hard in the offseason.

“When you put all of the small things together, it makes for a big pile of success.  And success breeds success.”

Four Lions from the defense have grabbed preseason All-American attention.  Free safety Isaiah Ross and defensive end Ronald Burgess, both seniors, were placed second team and third team, respectively, on the list.  Linebackers Chace Green and John Hunter were honorably mentioned in that group, too.

Look for senior defensive tackle Pierre Alexander is an anchor on the tough Lions’ defensive line.

Langston is looking to win the CSFL for the third straight season, but Sanders is not taking anything lightly.
“We’re going to respect all of our opponents in the conference,” Sanders said.  “We have a pretty tough conference and we’re going to take it one step at a time.

“And at the end of it all, hopefully we’re going to be the champions.”

The big one on the schedule this season is likely the Nov. 9 matchup at Bacone.

“(Coach) Trevor (Rubly) does a great job with his kids.  We respect Bacone; those guys are tough.

“We just need to remain disciplined and take care of our business.”

As Langston has done in recent years, the Lions have only three of 10 games at home in W.E. Anderson Stadium.  However, those three all are CSFL contests.

If the Lions can move through the league as it did in 2012, the momentum could carry over into a deep postseason run.

A run that just might send them all the way to Rome.