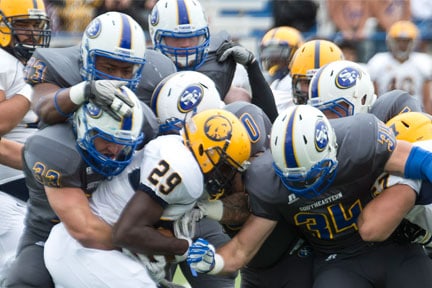 That was what remained on the clock at the end of the long day and seemingly longer evening in Durant.

The contest between Southeastern and Texas A&M-Commerce was called before the clock ran out following a brawl in which both sides were cleared as tempered that had been fraying throughout the evening finally snapped.

Southeastern (1-4) held a 17-14 lead at the intermission, but that break wound up being much longer due to lightning in the vicinity.  The delay made halftime last for more than two hours.

When the teams came back, Commerce took the momentum.  Lion quarterback Tyrik Rollison tossed a pass to Vernon Johnson, who took it 76 yards for the score early in the quarter.  Just before the end of the period, Dionte Taylor returned a blocked punt for a touchdown and A&M-C went up by 11 points.

Southeastern’s Greg Jackson intercepted a pass on the Lions’ first possession of the fourth quarter and Nick Sioson hit Chad Laury for a 5-yard touchdown on the next play as the Storm cut the Lions’ lead to 28-23.

Southeastern coach Ray Richards was proud of his team’s effort.

Commerce tacked on a field goal to make the score 31-23 and Southeastern started its final drive on its own 38 with 2:42 remaining with a final chance to send the game to overtime.

The Storm converted on fourth down twice during the possession.  Then Sioson connected with Kaymon Farmer for a 10-yard TD pass to get SOSU to within two points.

But Southeastern was assessed a penalty for unsportsmanlike conduct, pushing the ball back to the 18-yard-line for the two-point conversion attempt.  It appeared that Sioson completed his pass to tie the game, but after a delay, it was ruled incomplete.

The Lions recovered the ensuing onside kick attempt at midfield. When Storm players tried to tear away the ball, the frustration of the evening exploded and the benched cleared in a melee that encompassed the field.