Looking Back: A painful conclusion clouds a strong season 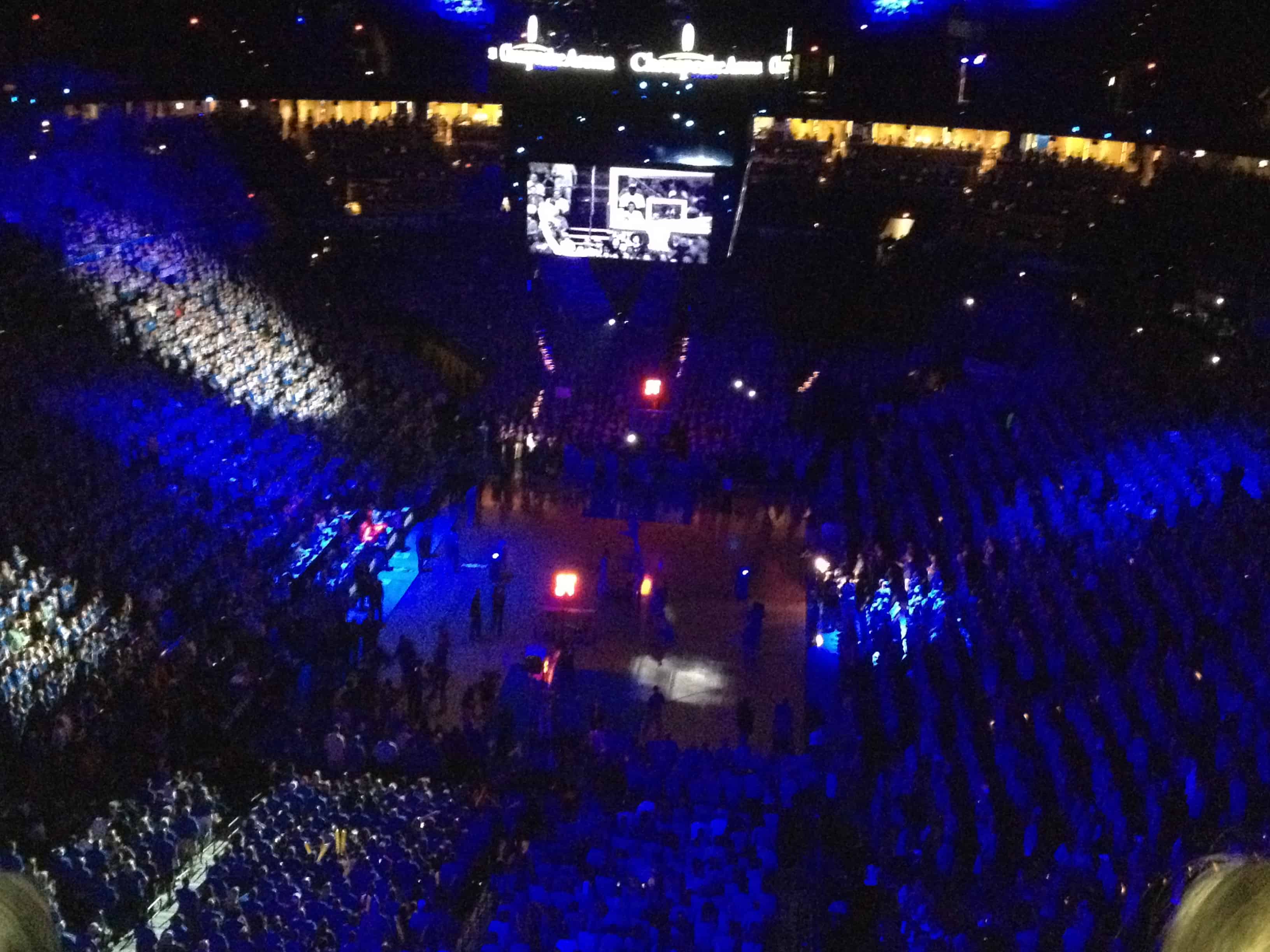 Loud City thunders up as OKC takes the court.

Less than 24 hours removed from the disappointing conclusion to the 2011-2012 season, it can be difficult to find the silver lining in how it all ended.  As time goes on, however, it will be easier to see that this was a special season for the young Thunder team.

After waiting through a prolonged off-season due to the lengthy CBA negotiations, many Thunder fans were just happy to have a reason to be back at the improved and recently renamed Chesapeake Energy Arena.  The Thunder gave fans a wonderful Christmas present on opening day by defeating the Orlando Magic.  Only a few nights later, OKC made a preliminary stab at avenging their exit in the Western Conference Finals the previous year against the defending Champion Dallas Mavericks off a buzzer-beating three from Durant.

The season was full of its ups and downs, especially with the condensed schedule that saw the Thunder in action several times each week.  For fans who had been wondering if there would even be a basketball season, this was a real treat.  It did take its toll on the players though.  On Jan. 7, in a victory over the Houston Rockets, backup point guard Eric Maynor tore his ACL and was done for the season.

When the All-Star break arrived, the Thunder held the best record in the Western Conference, which meant that Scott Brooks and the rest of the Thunder coaching staff would be the ones overseeing the stars representing the West.  Among those were two of Brooks’s own, Kevin Durant and Russell Westbrook.  The West topped the East 152-149, and Durant was presented with the MVP award after the game.

Several Thunder players were honored with end-of-season awards.  Kevin Durant won the scoring title for the third consecutive year, becoming the youngest player to ever do so.  He was also named to the All-NBA First Team.  His teammate, Russell Westbrook, was on the All-NBA Second Team.  James Harden was named the Sixth Man of the Year.  Serge Ibaka, who led the league in blocks, earned a spot on the All-Defensive Team after coming in second in the Defensive Player of the Year voting.  For this group, however, individual awards were not the goal.  The Thunder’s young stars were determined to win in the games they still had to play.

In the first round of the playoffs, they faced off with the Mavs, hoping to repay the favor Dallas had shown them the previous season, and that is exactly what they did.  Several of the games were close, and at times, the Thunder had to come back from some daunting deficits.  Kevin Durant struck again in Game 1 with a last-second jumper to beat the Mavericks 99-98.  In Game 4, Dallas tried to avoid elimination at home, but the Thunder got the sweep after James Harden engineered an impressive comeback in the fourth quarter.

Next, OKC encountered the Los Angeles Lakers led by Kobe Bryant.  One of the big story lines from the series was Derek Fisher’s return to LA.  Fisher ended up in a Thunder uniform after the Lakers acquired Ramon Sessions to fill his role on the team at the trade deadline. Of course, the even bigger story was the return of Metta World Peace to the lineup after a seven-game suspension for elbowing James Harden in the head in one of the last games of the season.  Harden suffered a concussion from the incident, and he missed the final two games of the regular season.  In the series, the Thunder again had to overcome a large deficit in the final eight minutes of Game 4.  The Lakers had the chance to tie the series, but Durant again drained a clutch three-pointer that sent his team back to OKC for the closeout in Game 5.

In the Western Conference Finals, the Thunder matched up with the San Antonio Spurs.  The Spurs had been on an incredible run, winning 20 games in a row.  After the first two games, it did not look like their streak would end any time soon.  Many said the seasoned Spurs were just too much for the young and inexperienced Oklahoma City team.  In Game 3, however, the Thunder ran the Spurs out of the gym.  Oklahoma City won the next game at home.  The real test was Game 5, but Oklahoma City showed its mettle when the team beat San Antonio on the road.  A desperate Spurs team came out with some fire in Game 6, trying to force a Game 7 back on their home court.  The Thunder overcame an 18-point deficit to earn the title of Western Conference Champions.

With their regular-season record, the Thunder went into the NBA Finals with home court advantage.  It was the match-up that everyone had been waiting for with the three-time scoring champion facing the three-time MVP.  The Thunder took Game 1 off 36 points from Duarnt, but the Heat stole Game 2 in the Thunder’s first postseason loss at home.  From that point on, OKC faced the challenge of winning a game in Miami against the determined Heat.  In Game 4, Russell Westbrook put up an impressive 43 points, but the Heat got the win to go up 3-1 in the series.  The Thunder faced elimination for the first time in the postseason, but they also had a chance to make history by becoming the first team to overcome a 3-1 deficit in the NBA Finals.  Ultimately, the Heat were too close to be denied the victory, and they were crowned the World Champions.

It was deeply disappointing for the young team.  Scott Brooks told his guys they had no reason to hang their heads, but Kevin Durant showed the pain of the loss when he cried on his parents’ shoulders in the tunnel after leaving the court.  The team never doubted their ability to win because Scott Brooks never let them use their youth as an excuse.  Maybe that is what makes the end to this season so difficult for many Thunder fans.  They are still incredibly proud of their team, showing up 4,000 strong to welcome the Thunder home when they arrived at the airport, but having seen what their team was capable of and never buying into the youth and inexperience excuses, it is hard to accept that now is not their time.

The Thunder still have an incredibly bright future.  They have continuously improved each year since arriving in Oklahoma City, going deeper into the playoffs with each new season.  With the four players that comprise their core all under 24 years old, these young men are sure to continue their growth and development.  Thunder general manager Sam Presti has assembled a remarkable group, and if he can just keep them together and continue adding pieces as he has throughout his tenure, there is no reason to think OKC could not be competing for championships for years to come.  Still, a day after a heartbreaking end to the season when all fans feel is the unfulfilled hopes for what could have been, Kevin Durant said it best, “It hurts.”