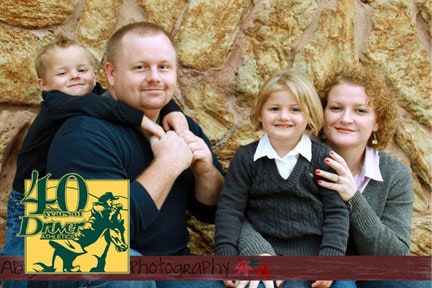 CHICKASHA – Albert Loveless, Jr., may have been the epitome of an interdisciplinary studies student at USAO in the mid-1990s. Loveless, an art student turned athlete, ran cross country for the Drovers in 1994, competing both seasons of the sport.

Now, using his art degree and a business sense, Loveless is the owner and operator of AllStar Screen Printing in Piedmont.

“I decided to start my own business and I didn’t think it would last more than a couple of months,” Loveless joked. “But almost 10 years later, I’m still going at it, and it’s growing every year.”

Loveless is one of nine former athletes to be honored at the 40th Anniversary of Athletics, scheduled on USAO’s campus Nov. 1-3. The weekend full of events is open to all former students, athletes, coaches and all fans.

Starting AllStar shortly after the birth of his children in 2005, Loveless had enough extra cash to pay himself for just three months. The company now supports more than 400 clients, from large corporations to non-profit entities to community groups.

“The teachers, they were just very interested in what I was doing and would sit down with me and talk to me,” he said. “And that was really cool. I felt at home there.”

Loveless remembers his first day, standing the hallway sizing up the competition with the other freshman art students.

“We were all kind of looking at each other wondering who was the best one here, and I just said, ‘that would be me,’” Loveless said, laughing.

A former cross country runner, Loveless was asked to join the squad when USAO took on the new sport. But having taken nearly two years off, he didn’t realize quite was he was getting into.

In a race at Oklahoma Christian, Loveless and his teammates had prepared to run a five-kilometer race, or 3.1 miles.

It wasn’t until he was halfway through the race that he found out with was actually going to be twice the distance, Loveless remembered fondly.

“After the race was over I realized just how old a 22 year old could feel,” he said. “My muscles began to tighten up so I whipped out the Icy Hot. A few minutes later one of the younger runners, 18 year olds, were asking who was using Icy Hot. When I said it was me, one of them said, ‘oh it’s the old guy.’ It made me chuckle. I was 22 and considered old.”

Loveless graduated with his art degree in August of 1997. Still, 15 years later, he remembers things he learned in the classroom every day.

“Even to this day, when I am doing art, I hear Hollis Howard or Kent Lamar say something,” he said. “When I hear them in my head, I just kind of laugh.”

Lamar remembers Loveless as a hard-working student, always with a smile on his face.

“Albert always had a good attitude. He wanted to do well,” Lamar said. “He tried hard. He was pleasant. Always happy — even when I ticked him off. He just liked being part of the group and participating in art club.”

Loveless learned the screen-printing trade working for Star Trophy in Chickasha while he was in college. After graduation, he worked at a couple different screen-printing companies before moving to what he described as a “desk job.”

“I soon realized that I missed screen-printing,” he said. “I started saving my bonus money and bought my first press with cash from an advertisement on Craigslist in 2004.”

The birth of his twins, Sian and Nathaniel, now six years old, encouraged Loveless to make a business out of it.

Loveless now attends art shows on occasion and even is raising another generation of potential USAO artists.

“My little girl is an artist. She won an award in a local show,” he said proudly.

Loveless and his wife, Sara, live in Piedmont with their children. He is a deacon at Soldier Creek Church of Christ, and forever an athlete, both he and his wife are both six months away from earning their First Degree Black Belts.

While as a Drover, Loveless had visions of attending art shows every weekend and seeing his art hanging up in galleries, he doesn’t regret where his life has taken him.

“It is what it is. I still do art — just on T-shirts. My work is displayed quite a bit. Everywhere I go, someone is wearing my own design,” he said. “I’m perfectly happy with what I have. I have a great wife who supports me and two great kids, and we’re living so we’re good.”

Jessica Jackson is the Sports Information Director at the University of Science and Arts of Oklahoma.