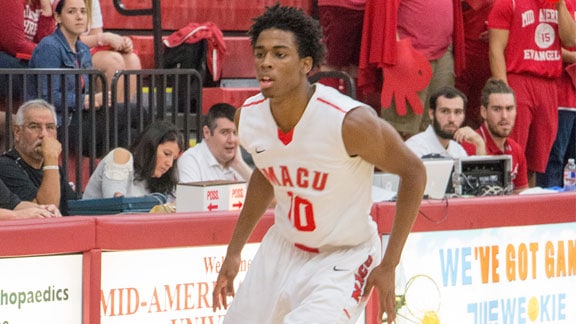 OKLAHOMA CITY — Heading into last season under new head coach Josh Gamblin, the Mid-America Christian University Evangels adopted the motto “willing”. Affirming that the team was willing to do whatever it took, regardless of the sacrifice, for the good of the team and the program. The mindset carried the Evangels into Kansas City, Mo. for the NAIA National Championship tournament, where the Evangels grinded out five tough games, culminating with a thrilling 100-99 overtime victory over No. 1-ranked Georgetown (Ky.) that gave the program its first-ever NAIA National Championship.

Not surprising, the Evangels will once again use the motto “willing” as they embark on the 2016-17 season and prepare to defend their national title against all comers.

That title defense begins Oct. 25 as the Evangels host Manhattan Christian College at 6 p.m. inside the Gaulke Activity Center.

Gambin, the youngest coach (27 years old) to ever win a men’s basketball national championship at any four-year level college, believes the Evangels are ready to compete with a target on their back as the defending national champs.

“We have talked about it a ton, what it’s going to be like to take everyone’s best shot this year,” Gamblin said.  “The last two national title winners have not made the NAIA tourney the following year. Our guys know we have to be even more mentally tough. We can’t relax or change what got us to this point.”

With Gamblin welcoming back senior point guard Malcolm Mann and senior forward Devonse Reed, the Evangels will arguably sport the best returning duo in the NAIA.

Mann gained national notoriety by driving the length of the court in four seconds to hit a driving one-handed shot that gave the Evangels the national championship win and landed on ESPN’s Sportscenter Top 10 list at #3 for the night.

But the reality is Mann displayed a championship pedigree running the MACU offense long before then. Mann dished out a school record (as an NAIA program) 184 assists last season, including tying a single-game mark with 13 dimes in a win over Bacone College (1/28/16). The versatile guard also recorded a team-high 66 steals last season along with 4.1 rebounds per game.

Reed was a key cog in the Evangels’ championship journey last season, stepping up each and every time it was required. Named the Chuck Taylor MVP of the tournament, Reed was the Evangels’ offensive catalyst throughout the tourney, averaging 24.4 points per game in the five victories, including a career-best 30 point effort in the semifinal win over Campbellsville (Ky.) and then a team-high 25 points in the national championship win over No. 1-ranked Georgetown (Ky.)

For the season, Reed was also the team’s leading scorer with 16.2 points per game.

“Talk about two special kids – I don’t have words to describe what Malcolm and Devonse mean to me personally and to our University as a whole,” Gamblin said.

“Just know this… when they graduate, we will not be able to replace them.  Their combination of character, talent and discipline is something that is extremely hard to find.”

Ex’Zavia Seaton, an athletic senior forward, is also back after averaging 6.3 ppg, 4.3 rebounds along with 20 steals and 15 blocks.

On the interior, senior center Yuri Hager has good size at 6’7 and is expected to be back in action after sitting out last season with an injury. Hager last appeared in 27 games in the 2014-15 season and posted career-highs in points (5.1 ppg) and rebounds (3.3 rpg) during the 2012-13 campaign.

The Evangels also welcome back four seniors who will look to carve out a role this season, including a trio of guards in Jerrick Warren, Devante Moore and Trey Slate along with forward Will Brewer.

Warren has served as the team’s backup point guard the past three seasons and can be counted upon to deliver quality minutes running the offense. Last season, Warren appeared in 34 games and dished out 54 assists.

Moore played in 33 games last season, while Slate and Brewer competed in 18 and 11 outings, respectively.

However, the Evangels will have some holes to fill this season after losing NAIA All-America performer Nick Tate, their top two three-point shooters in Bryon Miller and Jerrick Massenburge and also the school’s all-time leading shot blocker (as an NAIA school) Chris Runnels.

Off the court, Gamblin, the 2015-16 Rawlings-NAIA Division I Men’s Basketball Coach of the Year, oversaw a unit that received the Dr. James Naismith-Emil S. Liston Sportsmanship award at the conclusion of the NAIA tournament.

The award speaks to the character of the student-athletes that Gamblin and his coaching staff have brought into the program that obviously paid dividends on the court as well.

The schedule continues this Friday night (Oct. 28) and will feature the much anticipated ring ceremony and also the night that the NAIA National Championship banner will be raised as the Evangels play host to Philander Smith at 7 p.m., with the ring ceremony set for 6:30 p.m.

Overall, the Evangels will have 11 home games before the Christmas holiday, including an exhibition matchup against NCAA D-II Southwestern Oklahoma State University on Nov. 5 and the Sooner Athletic Conference opener against Texas Wesleyan University that is set for Dec. 1.

“We feel like we put together a really tough schedule,” Gamblin said.  “Langston is a top 10 team, Philander beat us last year and Lindenwood-Bellville brings back an All American and two NCAA D-I transfers. And that’s just three out of our first four games. We will be challenged to say the least and if we are not ready, we will be in a hole early.