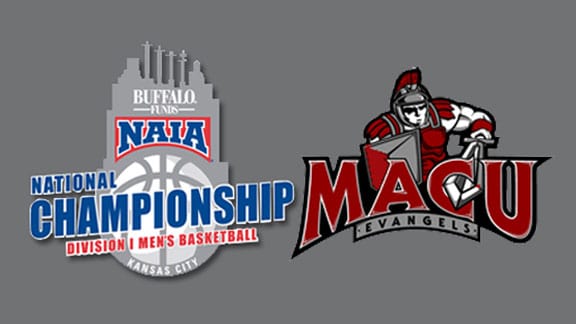 The Evangels now move on to the round of 16 to face Missouri Valley College tomorrow night (Mar. 20) at 8 p.m.  Missouri Valley upset No. 4-ranked Freed-Hardeman tonight 71-69 in overtime.

“Our guys are hungry and they came up here realizing that we’d be one of the few teams that are here for the first time, so they had a lot to prove,” MACU head coach Willie Holley said.  “They really came out ready to play.”

The Evangels came out strong, scoring the first eight points of the game and jumping out to a quick 10-2 lead.

MACU built the lead as high as 12 on three occasions in the opening half before settling for a 38-28 lead at the break.

A key play in the half came when Semar Farris recorded a steal at midcourt late in the half and drove coast to coast for a layup that extended the lead to 12 for the third time in the period.

“I just try to play hard and do the little things and if I feel like I can get a steal I’ll go, but also be smart about it and not gamble as much,” Farris said.  “Defense wins games, you’re not going to win too many ballgames without playing hard defensively.”

Reggie Davis started the surge with a three that also featured two treys from Jerrick Massenburge before a three from Farris capped the run.

MACU wasn’t through and recorded their biggest lead of the game of 77-53 on another trey from Massenburge that put it away at the 6:41 mark.

Holley partially credits the victory to playing a country song entitled “Come from the Heart” by Kathy Mattea at shootaround that was designed to entice the players to be loose during the big game.  The song talks about “singing like you don’t need the money” and “dance like no one is watching”

“The song we played today at shootaround worked and the guys certainly displayed that type of performance tonight,” Holley said.

Massenburge led the Evangels with 17 points and nailed 4-of-7 from three-point distance. Farris scored 16 points along with six rebounds, four assists and four steals.  Chris Runnels added 12 points and had a team-high seven rebounds.  Runnels was also a perfect 6-of-6 from the free-throw line.  Brock Hunter and Josh Smith also scored in double-figures with 10 points apiece.

Morris Wright paced the Gold Rush (24-10) with 27 points, while Syndney Coleman scored 12 and had a team-high nine boards.  Anthony Goode and RJ Daniels each added 11 points for Xavier.

The Evangels’ scoring output came against an Xavier defense that entered tonight’s game ranked sixth in the NAIA in scoring defense, allowing only 63.5 points per game.