MACU stays in SAC races with sweep at John Brown 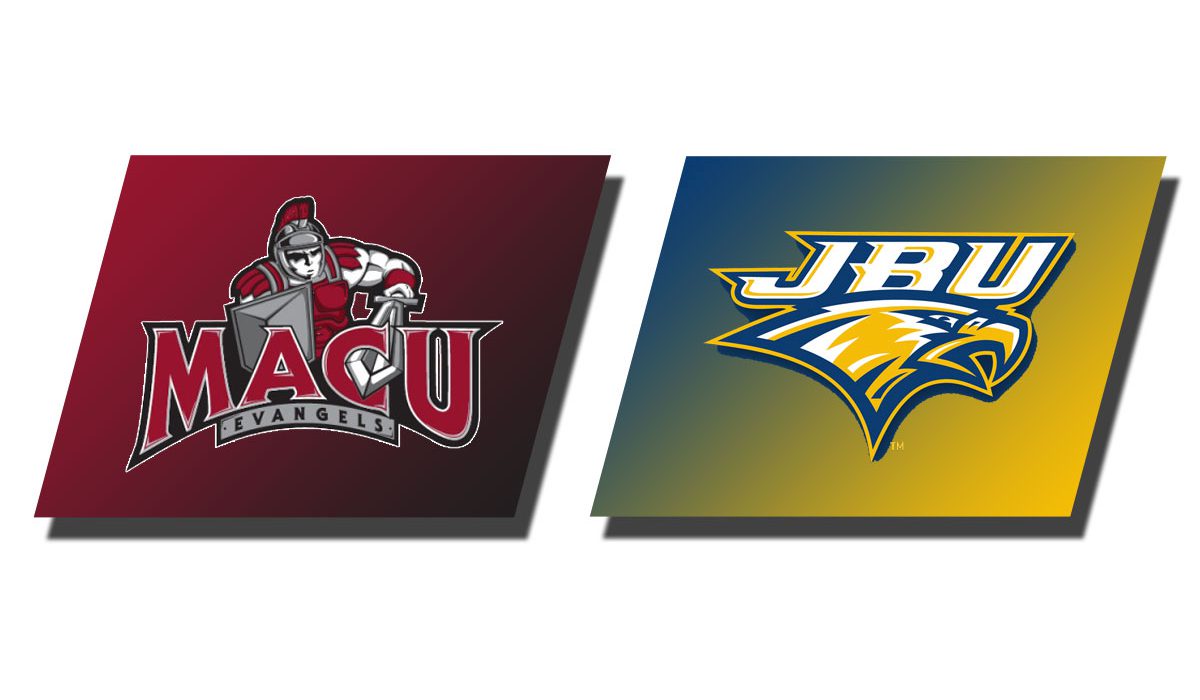 SILOAM SPRINGS, Ark. – Rarely in basketball does a team out-score its opponents by double-digits on fast breaks, but when they do, that team usually picks up the victory. That held true on Saturday afternoon for the Mid-America Christian University women’s basketball team.

JBU opened the game on a 10-2 run, but MACU rallied with an 11-8 spurt to tie the game at 13 with 2:18 to play in the first frame. The Golden Eagles recaptured the lead at 15-14 with 1:04 to go in the period, but a pair of Jennah Coffman free throws, followed by a Nevada Denton steal and fast-break layup in the final 44 seconds of the quarter gave MACU an 18-15 lead after 10 minutes.

JBU quickly surged ahead in the second quarter, and the game remained close through the first 5:16 of the second period, but a defensive foul at that point put Alexis Shannon on the free throw line where she knotted the score at 26, and the momentum began to shift to MACU. The Lady Evangels went on an 11-2 run to take a 35-28 lead, and the run was capped by a steal and fast break layup from Coffman. The momentum continued to stay with the Lady Evangels, and as the first half horn sounded, Coffman found Shannon for a 3-pointer to give MACU a 42-32 lead at the intermission.

JBU slowly whittled away at the MACU lead in the third quarter, as the Golden Eagles held MACU to only two points in the first five and a half minutes of the second half, and as a result, JBU closed to within three at 44-41 with 4:45 left in the period. With the margin still at three in MACU’s favor with 1:17 to go in the stanza, Coffman buried a 3-pointer to set off an 8-2 MACU run to end the quarter, with another steal leading to a fast break bucket, this one a steal from Chelseah Savage who found Jessica Fairley for the finish on the break.

MACU came out of the quarter break and put the pedal down, scoring the first five points of the frame to claim a 14-point lead, and the game was not close the rest of the way. The Lady Evangels never led by fewer than 11 in the final 9:40 of the game, winning it comfortably, 74-63.

The Lady Evangels had perhaps the most well-balanced offensive afternoon of their 2017-18 season on Saturday. Five Lady Evangels were in double-figures, with Shannon, Coffman, Savage, and Brittany Thompson all tying for the team lead with 12 points. Fairley added 10 in the win, and Ossyana Ozoani added eight in the win. Thompson had eight rebounds, Savage and Coffman each dished out six assists, and Coffman led the way with seven steals in the win.

MACU will return home for their final home tilt of January on Thursday, when they host the Texas Wesleyan University Rams (7-11, 5-5 SAC) at 6 p.m. The Lady Evangels took a 78-69 win in the teams’ first meeting this season in Fort Worth, Texas on Dec. 16.

SILOAM SPRINGS, Ark. – In college basketball, when a coach finds a mismatch that favors his ballclub, he will attempt to exploit that mismatch at every opportunity. On Saturday afternoon for the Mid-America Christian University men’s basketball team, that mismatch was named Therence Mayimba.

MACU (12-6, 6-4 SAC) continually fed Mayimba in the paint in the second half, and the Evangels were able to pull away from the host John Brown University Golden Eagles (10-8, 5-5 SAC) as a result, taking the 88-74 win to stay within a game of the lead in the Sooner Athletic Conference.

The game started tentatively, with the teams combining for only eight points in the first four minutes, but MACU quickly built a moderate lead. The Evangels put together an 11-2 run to take a 13-6 lead with 13:32 to play in the opening frame, but JBU had an answer. A 10-2 spurt for the Golden Eagles helped them reclaim the lead at 16-15 with just under 11 minutes left, and with 10:11 to play, the score was knotted at 18. The Evangels spent the rest of the first half slowly drawing away from the Golden Eagles, leading by as many as seven, and at intermission, MACU led 42-38.

Keyshawn Perkins pushed MACU’s lead to eight with a bucket at the 17:02 mark of the second half, but JBU had one more run in them. The Golden Eagles got a 3-pointer from Marquis Waller with 14:23 to play that cut the MACU lead to 55-52, but MACU answered with a 9-0 run that was capped by a triple from Justin Bogle that put MACU up 64-52 with 10:45 left on the clock. In the final minutes, The Evangels exploited the mismatch that Mayimba created, going to him on six different possessions and leading to 12 points as MACU pulled away to the 14-point win, 88-74.

MACU will return home on Thursday night when they host the Texas Wesleyan University Rams (13-6, 7-3 SAC), one of three teams tied for the SAC lead just one game ahead of MACU, who leads a 3-way tie for fourth. MACU defeated the Rams 77-71 in the team’s first meeting this season. Tip-off is scheduled for 8 p.m.