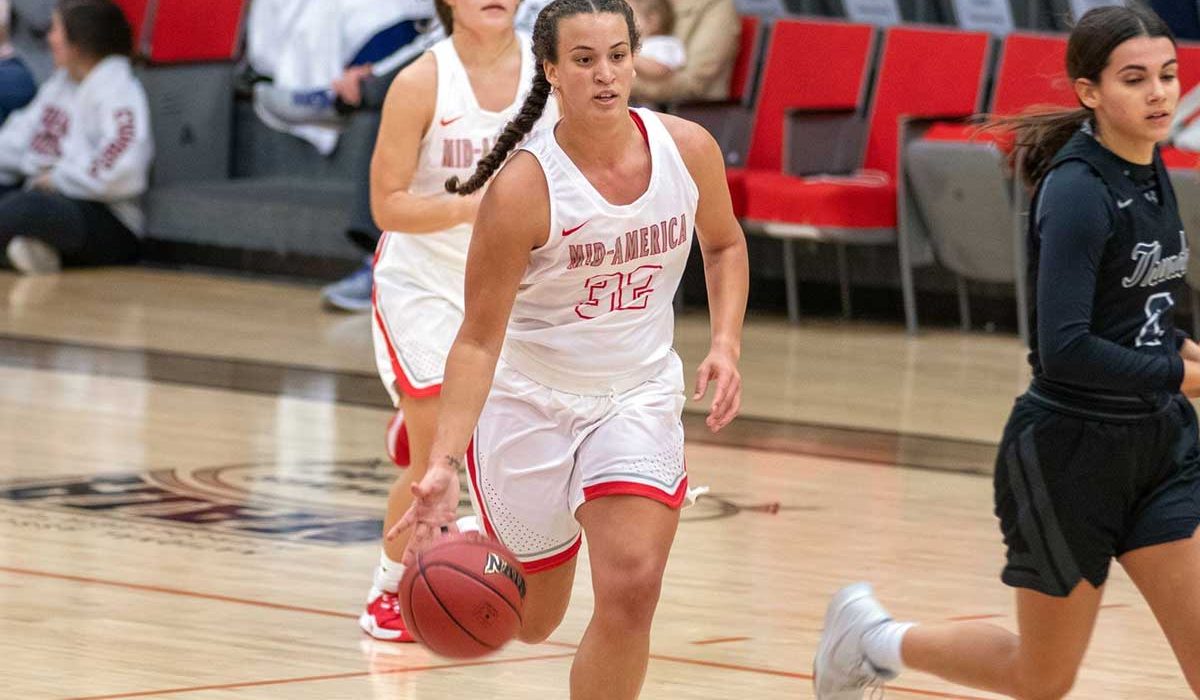 DENTON, Texas – The Mid-America Christian women’s basketball team pulled off one of the biggest upsets in program history as a late rally propelled the Evangels to a 61-59 victory over NCAA Division I North Texas on Thursday afternoon at The Super Pit.

Mid-America Christian (3-0) trailed the Mean Green by as much as 17 in the second half, but the Evangels fought their way back as a pair of Alexis Shannon free throws gave MACU the lead with 55 seconds left. Shannon came up two big defensive plays after knocking down the go-ahead free throws, recording steals on back-to-back possessions converting another free throw to extend MACU’s lead to two with 3.7 seconds left.

After a UNT timeout, Shannon came up another enormous play on the defensive end. North Texas tried to feed the ball into the low post following the inbound play, but Shannon was able reach in and knock the ball away, preventing the Mean Green from getting the potential game-tying shot up before time expired.

Mid-America Christian kept the game close midway through the first quarter when Wycoff came up with a layup and three-pointer on back-to-back possessions to tie the game up at five with 5:58 to go. However, UNT rattled off seven unanswered and extended its lead to as much as 10 before heading into the second quarter with the 22-13 advantage.

While the Evangels were unable to cut the deficit to single digits after an Anisha George score made it 24-13, MACU prevented the Mean Green from pulling away. UNT could only build its lead to as much as 14 before going into the half with the 34-21 edge.

North Texas was able to extend its lead to 42-25 with 6:43 to go in the third period, but the Evangels clawed their way back, shrinking the deficit to 49-41 heading into the fourth quarter thanks to a Hernandez three with 42 seconds left.

The MACU surge continued early on in the final period as Anna Kash buried three-pointers on consecutive possessions to close the gap to two at 49-47 with 8:31 left to play. North Texas built its lead back to six, but two more Hernandez three-pointers in-between a N’Yah Boyd bucket, narrowing the deficit back to two with less than three minutes to go before Mid-America Christian completed the dramatic comeback.

The MACU defense frustrated the Mean Green, holding the squad to just 25-of-79 (31.6 percent) shooting and completely shut down the perimeter game, limiting UNT to just 2-for-35 (5.7 percent) from beyond the arc.

While the Evangels were only able to 35 percent from the field, MACU was on-fire from beyond the arc, knocking down 13-of-29 (44.8 percent) from three-point land.

Mid-America Christian will look to carry its momentum into Austin, Texas on Saturday for a 1 p.m. tip as the Evangels will look to stay unbeaten at Huston-Tillotson.