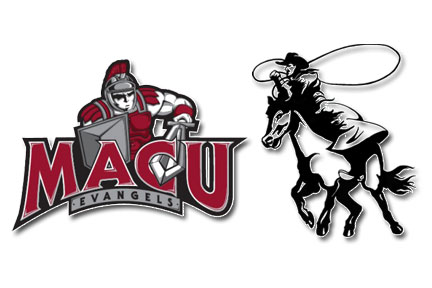 USAO took Northwestern to the wire Wednesday night in Alva, falling 80-77 to the Rangers, defending co-champs of the Great American Conference.  MACU lost by only six in Wichita Falls at D-II’s 12th ranked Midwestern State Mustangs.

The games were exhibition games, but basketball has indeed arrived and some of the up and coming teams look to be ready to make some noise this season.

Shavon Scott led the way for the Drovers with a game high 17 points.  USAO led through most of the game and had a five-point advantage midway into the second half.

Charles Markens had 10 points and four came at the free throw line late in the game as the Drovers held their final lead, 70-69, with four minutes remaining.

But a late surge by the Rangers sparked the home team. Five NWOSU players logged double-digit scoring, with T’aries Taylor putting in 17 points.

“As far as effort, the team gave the effort,” said USAO coach Vinson Metcalf.  “That’s all we can ask for from a new group of guys.

“One thing to mention, we only had 12 turnovers. That’s a pretty good indication that once things begin to go right, I think we will be alright.”

Darrien Dempsey had 13 points and his jumper gave Northwestern the lead for good with 3:41 left.

Meanwhile, Mid-America Christian traveled across the Red River for its first challenge of the season and gave the Mustangs all they wanted.

Five Evangels scored in double figures.  Semar Farris was at the head of that group with 15.

MACU coach Willie Holley said he knows his squad did well in its opener against a quality opponent.

“I was very proud of how we competed on the road.  We were able to compete on the boards and forced more turnovers than we gave up.”

MACU played tightly and held a lead off and on in the first half.  Angelo Lewis and Rodney Davis led a balanced scoring attack.

A jumper by Jarius Wilson and free throws by Lewis got the Evangels to within two with 1:30 left before the MSU put it away.

Midwestern State’s Cam Adderly narrowly missed a double-double (nine points and eight rebounds) and helped spark the Mustang run late in the half to put his team on top.

Monzaigo Williams had a game-high 19 points for MSU.

In a close game, it’s the little things that matter and Holley addressed that.

” The difference was missed free throws, which is something we will have to get better at,” Holley said.  “We missed 16 free throws shooting only 56.8 percent from the line.”