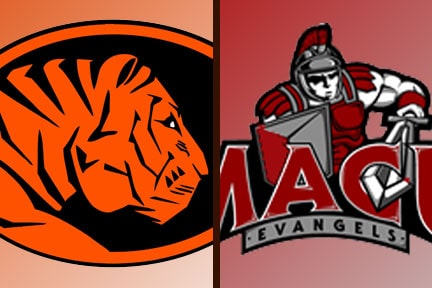 OKLAHOMA CITY — Trailing 14-10 in the fifth set, the Mid-America Christian University Lady Evangels saved three straight match points and pulled out a dramatic 3-2 victory over the NCAA D-II East Central University Lady Tigers on Saturday night at the Gaulke Activity Center.  The win is the Lady Evangels first over an NCAA D-II opponent since joining the NAIA.

After a kill by Danielle Essix gave the Lady Tigers a four-point lead in the fifth, things looked bleak for the Lady Evangels.

An attack error kept the Lady Evangels alive and then a service ace by Taryn Walker cut the deficit to two.  Two more attack errors by ECU with blocks from Becca Anderson and Calle Solie suddenly evened the set at 14-14.

Rene’ Crockett then came through with a kill to give the Lady Evangels a match point.

From there, the two teams exchanged the next three points until an attack error gave the Lady Tigers a match point at 17-16.

But Crockett recorded another kill to tie the set again and that was followed by a kill from Walker and a ball handling error by the Lady Tigers that gave the Lady Evangels the victory.

Solie powered the Lady Evangels with a match-high 41 assists along with 14 digs.  Crockett and Becca Anderson each led the team with 10 kills each.  Kacee Montgomery had eight kills, six block assists and 13 digs on the night.

Tatiana Booth led the Lady Tigers (2-9) with 16 kills, while Taylor Brown had a team-high 26 assists.  Megan Hammond had a match-high of 23 digs for ECU.

The Lady Evangels will next begin action in the Sooner Athletic Conference at St. Gregory’s University on Tuesday night (Sept. 18) at 7 p.m. in Shawnee, Okla.