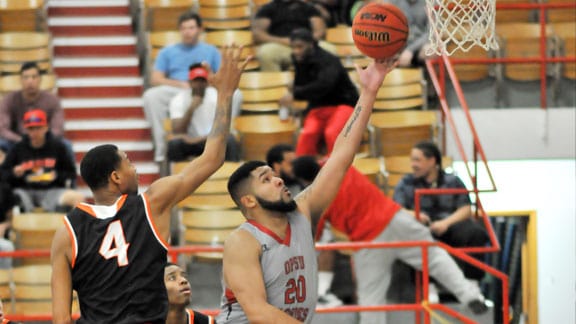 Goodwell — Antonio Manns, Jr. put up 56 points this week against two strong Heartland Conference opponents. Although the Aggies fell to both teams, losing to St. Edward’s on Thursday (64-72) and Texas-Permian Basin on Saturday (88-102), Manns put up game-high numbers in both performances and is now just 17 points shy of reaching one thousand career- points.

In Thursday’s matchup with, then 12-4, St. Edward’s University, Manns led with 14 points and seven rebounds after the first twenty minutes of play. The Aggie men gained a three-point advantage after a successful free throw from Manns at the 12:03 mark in the first half; but OPSU shooters went 5-23 from the field for the remainder of the half and left the floor down by eight points at the break (31-39).

Melvin Mitchell narrowed the gap to six points by opening the second half with a fast-break basket in the paint. The Hilltoppers answered with a three and, during the ensuing ten minutes the two teams battled but SEU continued to control the lead. By the eight minute mark OPSU was five points short of climbing ahead (50-54; but the Aggies then went 0-4 from the field while St. Ed’s shot 4-4, surging a 13-point lead with four and a half minutes left in the game. With each team totaling 33 points in the second half, the Aggies’ ending efforts were not enough to overcome the first-half deficit and St. Ed’s improved to a 6-3 conference record.

Manns finished with the games only double-double on 24 points and 11 total rebounds, earning game-highs in both categories. The Aggie’s next leading scorer came from the bench as Robert McCalley totaled ten points. Zoran Arsenovic ended with eight points, eight rebounds and five assists. Mitchell was well-balanced scoring nine points and dishing out a game-high of eight assists; he also brought down five boards and had one steal and one block for the game. St. Edward’s was led by Trey Lindsey and Frankie Mgbolu who combined for 32 points; Ethan Gilbert grabbed a team-high with ten rebounds for the Toppers.

The Aggies averaged 37.5 percent from the field and St. Ed’s shot at 45.2 percent; both teams averaged over 60 percent from the line, and OPSU outshot their opponent 4-3 from beyond the arc. The Toppers came away with eight more rebounds, totaling 40 boards to OPSU’s 32. Aggie head coach Jerry Olson was pleased with how hard his team played but commented, “We made some mistakes defensively and weren’t in the right spots on defense at times. In this league if you make mistakes, they score.”

Olson would repeat those words after Saturday’s loss to UTPB saying, “We just make some bad defensive mistakes that kill us at times. We can’t make those mistakes.”

In a similar story as the St. Ed’s game portrayed, the Aggies were outplayed in the opening half on Saturday as UTPB held a 46-33 lead at the break. While Manns had already racked up 15 points at halftime, only four of the 11 Aggies with playing time had added points to the board. The Falcons also dominated on outside shots landing nine three-pointers in the first half alone; OPSU shooters went one of eight as Manns hit the only three of the half for OPSU.

Another outstanding second-half performance found the Falcons and Aggies separated by just one point as UTPB narrowly outscored the Aggies 56-55. The Falcons gained their largest lead of the game after a three-point shot went through the net at the 11:40 mark. Manns came back with two layups and a three-point shot igniting a ten-point run by the Aggies that pulled the Falcon lead down to single-digits with a score of 61-70 and eight minutes still left on the clock. But, the Faclons dry spell was quenched by adding six free-throw points and landing five of six shots from the field in the following four minutes. UTPB reclaimed a 15-point advantage and held on for the 17-point win in the end.

Manns added 17 points in the second half to finish as the game leader with 32 points; Codye Hatcher led for the Falcons with 23 points. Zoran Arsenovic and Melvin Mitchell put up 16 and 13 points respectively and Dedrick Shannon, Jr. led the game in assists with a season-high of 11. Manns led his team at the boards with seven rebounds, but was bested by Hatcher and Gary Akbar who each brought down eight rebounds for the Falcons.

Outscoring the Falcons 52-38 in the paint and 25-11 on points off turnovers, the Aggies were beaten from the bench with UTPB scoring 47 points on the efforts of non-starters; OPSU totaled 16 bench points, twelve coming in the second half. Shooting averages from the field ended at 57.4 percent for UTPB and 47.8 percent for OPSU. The Falcons went 11-24 from beyond the arc for a 45.8 percent three-point average; the Aggies shot at 22.2 percent hitting 4-18. Leading at the line, the Aggies averaged 69 percent in free-throw attempts while UTPB averaged 58.3 percent.

Disappointed with the same defensive mistakes, Coach Olson added positive comments saying, “I thought our effort was unbelievable and I’m proud that we kept battling. It really hurt us, though, in the first half when we were down by four and then fouls changed the game; after that we went 4-14.” Noting player performance Olson concluded, “Antonio was really good and Dedrick was great with his 11 assists.”

The Aggies fell below .500 with the loss and move to an 8-9 overall record with one conference win. Fans can experience the excitement this week as Manns makes a run at the thousand-point milestone on Thursday, Jan. 28 against Lubbock Christian. The Chaps are currently 12-6 on the season and own six Heartland Conference wins. Tipoff is set for 7:30 p.m. following the Aggie women’s game, also versus LCU.