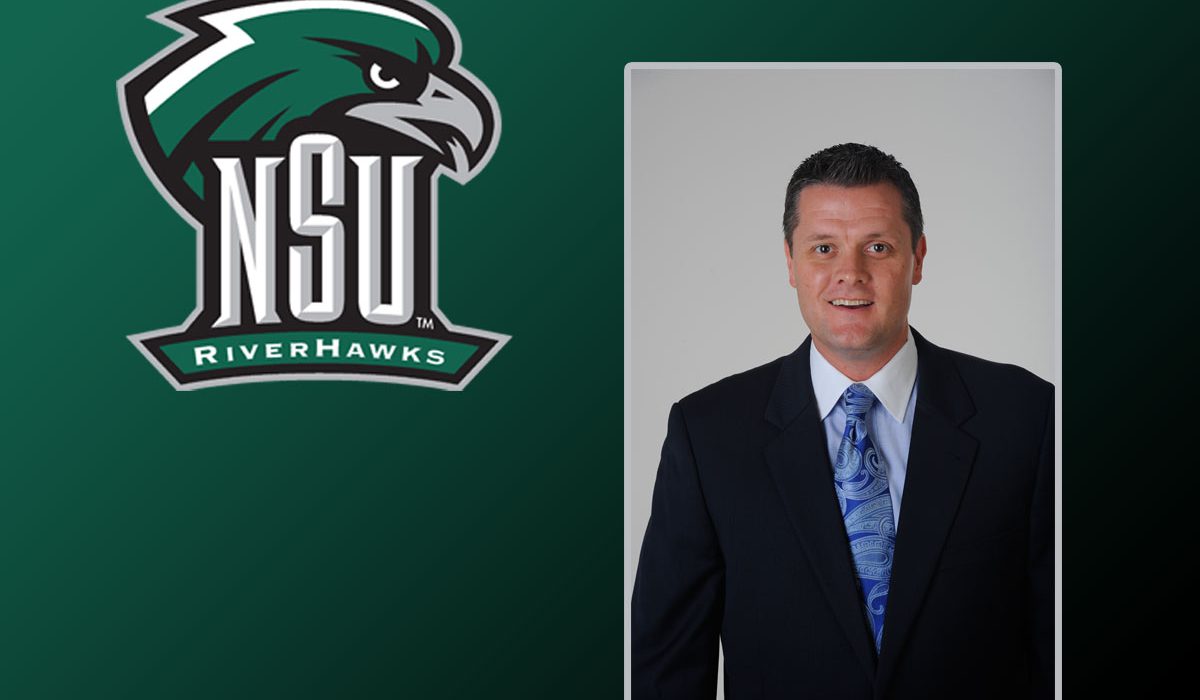 TAHLEQUAH – Northeastern State University Director of Athletics and Chief Athletics Officer Tony Duckworth, announced on Tuesday that Mark Downey will be hired as the university’s head men’s basketball coach.
Downey joins NSU Athletics as its tenth men’s basketball coach in its history and carries a 204-103 overall head coaching record, with four NCAA Division II Tournament Appearances, and has been named Coach of the Year six times.

“This is an exciting day for RiverHawks Nation,” said Duckworth.  “Mark Downey surfaced as the clear choice among an outstanding pool of applicants during our national search.  Division II AD’s, current and retired basketball coaches highly respect his abilities as a coach.  NSU and D-II basketball are significantly enhanced today by Mark returning to the level he loves.  He clearly understands the D-II model as reflected by the four NCAA tournament appearances he enjoyed as a head coach.  Mark’s knowledge of our region will allow him to hit the ground running.  I look forward to the immediate positive impact he will make on RiverHawks Basketball.  Welcome to Green and White Nation, Coach Downey.”

In the postseason, Downey is 19-6 in the conference tournaments, and he holds a 17-6 record in overtime games, with two wins against the top-ranked team in the nation.

Downey comes in the NSU after two seasons at Fort Wayne (NCAA DI) as the program’s top assistant on the bench, and has helped the Mastodons to appearances in the CollegeInsider.com Tournament (CIT) and the NIT, while going 44-23.  Prior to Fort Wayne, Downey spent the 2014-15 season at Bowling Green where they went 20-12, and he helped direct them into the second round of the CIT.  While with the Falcons, he helped coach Richaun Holmes, the Mid-American Conference Defensive Player of the Year, and a second round NBA draft pick of the Philadelphia 76ers.

Downey will be returning to NCAA Division II Basketball where he directed three different programs into the NCAA Tournament.

“We can’t put into words how excited I am to become the next head men’s basketball coach at Northeastern State University.  My wife and I want to thank, Athletic Director, Tony Duckworth and President Turner for believing in us to bring the RiverHawks’ program to national prominence,” said Downey.  “We are truly grateful and ready to hit the ground running.”

“While I was Arkansas Tech, I watched Coach Larry Gipson build a solid program and win a National Championship.  The strong tradition at NSU excites me and energizes me. We want to build off that tradition and add to the success of the past. I look forward to consulting Coach Gipson and building a lasting friendship with him and his family. He and his brother, Randy will be a valuable resource for a program.”

“My staff and I will build a roster with high character individuals that love to not only play the game, but work every day to get better.  Two things that I will guarantee to the fans, no team in the country will play harder than the RiverHawks and we will graduate our players. Our teams will be relentless both on and off the floor.”

At West Alabama during the 2012-13 season, Downey directed a one-year turnaround and qualified UWA for their first NCAA Tournament Appearance since 1982.  Downey won 14 Gulf South Conference (GSC) contests which was the most in the program’s history, and beat two NCAA Division I opponents: Abilene Christian, and The Citadel.
Downey spent three seasons at the University of Charleston as its head coach, returning to program he played for as a team captain for two years (1993-95).   In 2012, Downey finished the season ranked No. 17 in the nation, and with 26 wins which was fifth most in 140 years of basketball at UC.  Additionally, in 2012, he qualified UC for the first NCAA Tournament Appearance in 11 years.  One year later, Downey beat the top-ranked team in the nation, West Liberty, giving them their only loss of the season (30-1).

Downey kick-started the Arkansas Tech men’s basketball program during his four seasons as head coach (2006-10), and making a 24-win improvement during that time span. For eight weeks during the 2009-10 season he had the Wonder Boys ranked No. 1 in the country while winning 30 games, and starting the year on a 25-game winning streak. Downey led ATU to their first GSC West Division title and won the GSC Postseason Tournament.  The Wonder Boys reached the second round of the NCAA Tournament and Downey was picked to coach the 2010 NABC/NCAA Division II East All-Star Team. Downey was also voted as the 2010 NABC South Region Coach of the Year for going 30-2 during his 2009-10 campaign.

Before arriving at Arkansas Tech, Downey served as an assistant on University of New Orleans coaching staff for five seasons (2001-06).  Downey had three straight winning seasons and his 2001 recruiting class was voted top-20 in the country.  In 2014, New Orleans reached the Sun Belt Conference Tournament Championship before Hurricane Katrina uprooted the program to Tyler, Texas for much of his final season there

Downey’s first head coaching experience came at the age of 26 at Independence Community College (1999-01) where he won the 2000 NJCAA Region VI Championship in his first season.  Downey went 50-20 in two seasons, while being named as Region VI’s Coach of the Year.  During the 1998-99 season, he was Independence CC’s assistant coach and they finished runner-up in the Jayhawk Conference Eastern Division with a 22-10 record.

Downey also had a two years (1996-98) at Marshall where they won the Southern Conference North Division.  In 1997 and 1998, his recruiting classes was voted best in the league by ESPN.

After playing collegiately for the University of Charleston and Wheeling Jesuit, Downey spent the 1995-96 season at Barton College where he recruited a team that went 25-6 the following year and advanced to the NCAA Division II Tournament.

Downey has also appeared in the 2004 Jerry Bruckheimer film “Glory Road,” playing #30 Tommy Kron for the University of Kentucky.

Downey and his wife Ericka are the parents of two sons, Bryce, and Andrew. He earned his degree in Sports Medicine from the University of Charleston in 1995 and a Master’s Degree in Athletic Administration from Marshall University in 1998.

An formal introductory press conference with Downey will at 10:30 a.m., Friday, April 14 at the NSU Event Center.