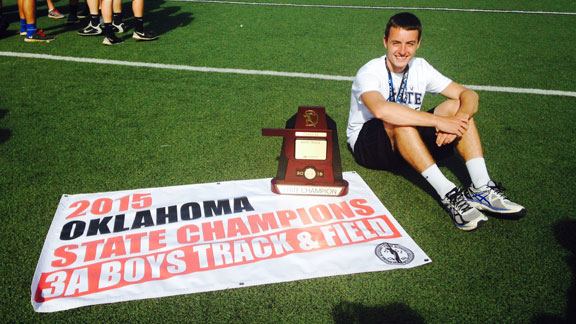 The Outlaws did it on the track again. Marlow won the Class 3A state championship in boys track for the second consecutive year.

And the title was clinched when senior Nathan Crowson took second in the 1,600 meter run.

Crowson said he was thrilled to win the state title again and that he knew what he had to do to assure his team the victory.

“It was just awesome to be able to repeat, especially in the senior year,” Crowson said. “To be able to go out on top was a lot of fun.” 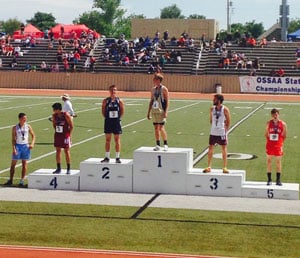 “Coach (Bobby Wortham) came up and told me while I was warming up we needed up eight points to seal the deal, and so, you know, that’s second place. We knew that was definitely possible and I could maybe even go and win it.

“I wasn’t all that worried about it, but of course there’s always the pressure of my team depending on me. But I think the best part of getting second and sealing the deal was that we didn’t really have to stress about the mile relay. I was on that, too, and that was good to be able to run that and our state championship didn’t depend on how we did.

“It was kind of a victory lap kind of thing.”

Crowson is a three-sport athlete at Marlow. And competing at the state level is nothing new to him. Not only is he a two-time state champion in track, but also he helped his team to the 3A state tournament in boys basketball.

And he would probably be a four-sport star, too – if he had the chance.

“I love playing volleyball on the side, but we don’t have that in school.”

Even football should be thrown into the conversation. In fact, the Outlaws’ track team might not have had Crowson on the roster, if his football days had continued.

“I didn’t start cross country and track until eighth grade.

“I played football up until freshman year, and then I had surgery on my elbow. And that’s when I started running cross country. I had a big ol’ brace on my arm, so I figured I might as well do something, so I went out and ran. 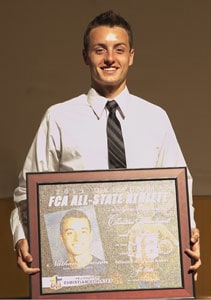 Crowson was tabbed an FCA All-Stater in 2015. He was nominated by Marlow coaches Matt Eaves and Nick Scalf.

“My family has a history of running. We do the (Oklahoma City) Memorial Marathon every year. Running was kind of normal for me. So I went out and did that and was successful at that, and that was good.”

Crowson was also recognized as an All-Stater in FCA this year.

“FCA has been huge for me,” Crowson said. “To combine God and sports together and to use it as a platform to reach people has been one of my favorite things to do.

Crowson got saved at a revival when he was 13 years old. And he plans to continue to learn more about not only his own Christian walk, but also how he can help others when heads to college at Oklahoma Baptist University by majoring in Christian cross-cultural ministries. He will run cross country and track at OBU as well.

He also spoke about lessons that are learned when sports and faith intersect.

“Last year during my junior year in cross-country at the state meet I went out a little fast and toward the end of the race, I just about passed out at the finish line.

“The last 100 meters, I was really struggling hardly to move. I felt like I was running as fast as I could and I was barely even walking – you know, I was in an oxygen depravation kind of thing. I was picked to be top three that year in cross country in the whole state and everything, and for some reason, it just wasn’t happening that day. And so, that was kind of my ‘Why did God do this to me?’ thing.

Marlow ended the two-day state meet with 98 points, 33 ahead of Washington in second place. For his part, Crowson earned points for his team with the second place finish in the 1,600 meter run, third place in the 1,600 relay, third in the 800 meter run and fifth in the 3,200 relay.

“I definitely felt like I was in better shape this year and that helped in the mile and the 800 and I attribute that to my distance coach, Matt Ivory. He ran at OSU in cross-country and track and he definitely knows what he’s doing.

“And he’s a pure volunteer. He’s actually a doctor in Duncan and he comes and works out with us because he loves being with us and helping us.”

Crowson was graduated last week from Marlow High School, and he leaves behind his days as a high school athlete the way he wanted – on top.

All photos provided by Nathan Crowson.