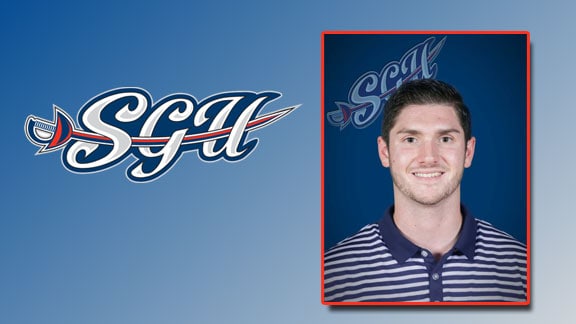 From SGU Sports Info.
Brad Collins, Sports Information Director
SHAWNEE – St. Gregory’s University announced on Tuesday that John Martin is vacating his post as head men’s basketball coach to assume a full-time role as the school’s athletic director. Assistant men’s basketball coach and SGU alumnus Dylan Lemley will be promoted to head coach.
Martin, who just completed his eighth season at the helm of the Cavalier program, has been serving in a dual role as head coach and athletic director since October 2014. Martin said although he will miss coaching, he looks forward to devoting more attention to the development of the university’s 17 varsity sports.
“Coaching men’s basketball at the collegiate level has been a dream come true for me and I could not be more appreciative to St. Gregory’s for that opportunity,” Martin said. “Saying goodbye to coaching is going to be hard for my family and me, but I am ready for this new challenge.
“We’ve got several quality programs here that deserve the focus of a full-time athletic director. This move will not only afford me the opportunity to be more efficient in my duties on a day-to-day basis, but also expand them to areas like alumni relations and fundraising.”
Martin’s teams have accumulated more wins over the last three seasons than any other Cavalier men’s basketball group over the same span. His 2013-14 team orchestrated the biggest turnaround in the NAIA, culminating in a trip to the NAIA National Championship semifinals – the furthest an SGU team had ever advanced in the postseason.
Martin was tabbed as one of 12 finalists for the 2014 Don Meyer Award, which is presented annually to the top NAIA men’s basketball coach. His Fab Four team had a program-best 24 wins, including 10 over ranked opponents and 12 within the Sooner Athletic Conference – also program records.
“Having coached and worked alongside Dylan Lemley, I know that he is an exceptional coach and a person of integrity,” Martin said. “I have no doubt that he will do a tremendous job of recruiting high-caliber student-athletes who fit the mission of this university – his alma mater.”
Lemley joined St. Gregory’s in 2015 as an assistant coach after a standout career with the Cavaliers. He played in Shawnee for three complete seasons, redshirting during the 2013-14 campaign.
A graduate of Roff High School, Lemley was named Sooner Athletic Conference Freshman of the Year after averaging 13.5 points per game in 2010-11. He scored in double figures in 20 of 26 games that season. Lemley notched a career-high 27 points his junior year against Southwestern Christian and finished his senior season by averaging 7.9 points per contest.
“It’s an unbelievable feeling to be named head coach at your alma mater,” Lemley said. “There aren’t many people as proud of this program and university as I am. My priority will always be to foster our team’s development in the classroom, on the court and in the community.”