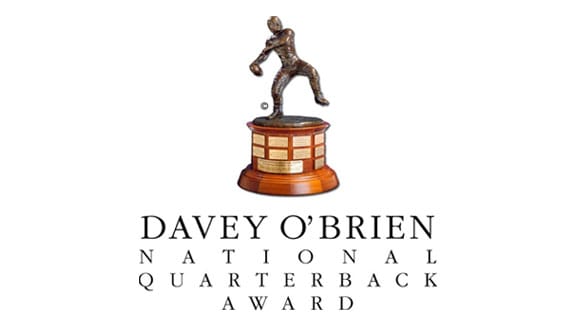 For his performance in the Sooners’ win over Texas, Baker Mayfield was recognized as one of the Great 8 finalists for Davey O’Brien Player of the Week this week.
The eight honorees, as determined by voting from the award’s selection subcommittee, also included: Washington’s Jake Browning, USC’s Sam Darnold, Joshua Dobbs of Tennessee, Luke Falk of Washington State, Alabama’s Jalen Hurts, Texas A&M’s Trevor Knight and Will Worth of Navy.
All 128 FBS quarterbacks are eligible for the weekly honor. The winner of the Davey O’Brien Quarterback of the Week Award, which will be one of the week’s “Great 8” quarterbacks, will be announced Tuesday.
In 1938, Davey O’Brien, who wore No. 8 as a star quarterback for TCU, became the first player ever to win the Heisman Trophy, Maxwell Award and Walter Camp Award in the same year. He was inducted into the College Football Hall of Fame in 1955.
The Davey O’Brien Foundation was created in 1977, and the National Quarterback Award, the oldest and most prestigious college quarterback award, was first issued in 1981. The Davey O’Brien Fan Vote, now in its 10th year, gives fans a chance to play a role in determining the award winner by voting daily at VoteOBrien.org.
Mayfield connected on 22 of 31 passes for 390 yards and three touchdowns and also rushed for one TD and 20 yards in a 45-40 victory over Texas.
The Player of the Week will be announced on Tuesday.