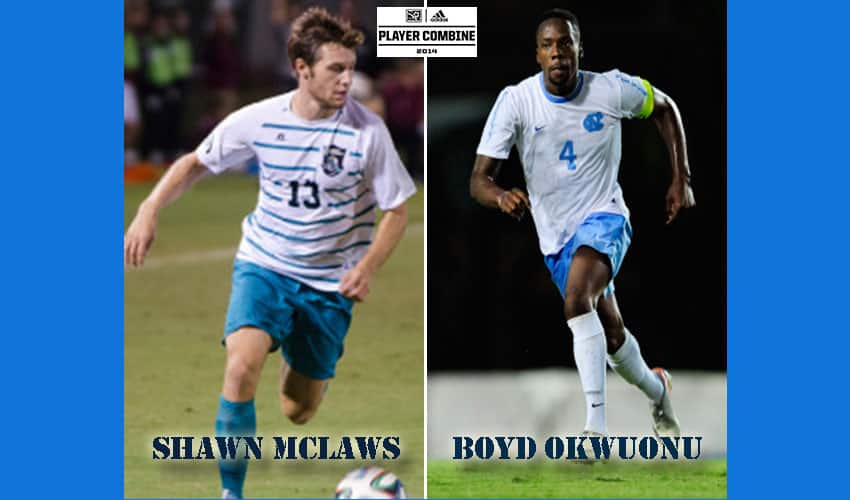 Shawn McLaws and Boyd Okwuonu were recently invited to the Major League Soccer Combine in January. The annual event allows the best collegiate soccer players a platform to showcase their skills in front of scouts from not only MLS, but the lower division leagues such as the North American Soccer League and United Soccer Leagues Pro Division.

Okwuonu and McLaws took different paths to reach this goal, but both have enjoyed standout seasons and careers.

McLaws, a Deer Creek High School star, played all four seasons as part of the Antlers varsity squad. Playing as a midfielder, McLaws scored 68 goals through his junior season, earning Offensive Player of the Year honors as a sophomore and junior.

McLaws also competed with Celtic 93 out of Norman. During the 2009 season, his team won the Region III championship which encompasses the southeastern United States, Texas and Oklahoma. In that same season, Celtic 93 finished as Olympic Development Program (ODP) National Runners-Up. The ODP is charged with recognizing and developing talented youth players. As a result of the team’s fantastic finish, McLaws and his teammates earned the opportunity to travel to Argentina.

Since signing his National Letter of Intent to play at Coastal Carolina, McLaws has been nothing short of excellent while transitioning to the backline. In his first two seasons, he appeared in 45 games and started in 40 for the Chanticleers, collecting five assists as a sophomore.

In his junior season McLaws finally began to earn conference and national recognition after leading Coastal’s defense to 12 clean sheets and a .83 goals against average. He was named to the All-Big South conference and tournament teams while garnering Big South Defensive Player of the Year honors. He also earned National Soccer Coaches Association of America (NSCAA) Second Team All-South Region honors.

This year, he helped lead the Chanticleers to the NCAA Division I Second Round before falling to Clemson 2-1. McLaws was again named Defensive Player of the Year and received All-Big South honors. He was also an NSCAA First Team All-South Region selection after another solid defensive performance. He leaves Coastal with a 73-18-3 record, three regular season Big South titles and two Big South tournament titles.

Joining McLaws in Florida is North Carolina standout Boyd Okwuonu. The fourth son of Ike and Imelda Okwuonu, Boyd grew up watching his brothers excel on the playing field. His oldest brother, Preston, earned a scholarship to play soccer at Oklahoma Christian. Scott, his second oldest brother was a standout runner and soccer player at Edmond Santa Fe High School. The third brother, Willie, was part of the Edmond Santa Fe soccer team that won the 2009 6A OSSAA State championship and earned a scholarship to play football at NCAA Division I FCS Weber State in Utah. Boyd played one season each at Santa Fe and Edmond Memorial High School before moving to Bradenton, Fla. to participate in the United States U-17 Residency Program.

Okwuonu made a name playing on the United States Youth National Teams and in the FC Dallas Academy system. In 2011, he was selected for the Milk Cup, an international tournament held in Northern Ireland between the premier youth national teams in the world. Boyd helped lead the US U-20s to a third place finish with a 2-1 win over Georgia.

A contributor to Okwuonu’s development has been the FC Dallas Academy program. The FC Dallas Academy is part of the United States Soccer Development Academy (USSDA) program which is tasked with developing the next crop of American-born soccer players. The ultimate goal is to develop enough talent to win a World Cup, and Dallas is one of the best clubs in the program. While with the team, Okwuonu won the USSDA National Championship in his final season.

Okwuonu has enjoyed a stellar career as a defender since signing with UNC. As a Tar Heel, he helped anchor a defense that would eventually win the 2011 NCAA Division I Championship 2-1 after a penalty kick shootout. He has earned Second Team All-American and First Team All-Atlantic Coast Conference honors three times each. Okwuonu also featured twice on the Hermann Trophy watch list, awarded to the best player in Division I soccer.

“It’s a wonderful place,” Okwuonu said about UNC. “I’ve played with a lot of guys who are like brothers to me now. I’m very thankful about my decision to stay after two years.”

In his senior season, Okwuonu and the Tar Heels made it to the College Cup quarterfinals before falling in a shootout to No. 2-seeded UCLA. As captain, he led his team to a 15-5-2 record, starting in all 22 games. Boyd kept the defense composed, allowing just .95 goals and 8.3 shots per game. Coming out of Chapel Hill, Top Drawer Soccer ranks Okwuonu 47th in their Top 100 collegiate players.

“I was happy with our season,” said Okwuonu about his final year. “We overcame a lot of obstacles, so to be able to get as far as we did was a real achievement. It was unfortunate to go out in the quarterfinals with the game that we played, but it is what it is.”

The two players will travel to Fort Lauderdale, Fla., to participate in the five day event Jan. 8-13. The invitees will split into four teams and play a series of scrimmages every other day, with player interviews occurring on the intervening days. The pair will learn their fate at the MLS SuperDraft, which will be held in Philadelphia on Jan. 15.

“To be honest, I’m not expecting anything,” said Okwuonu about the Combine. “I’m just going to go out there and try my best to play my game. Hopefully an opportunity presents itself.”