McPherson is an integral part of 40 years of Drover athletics 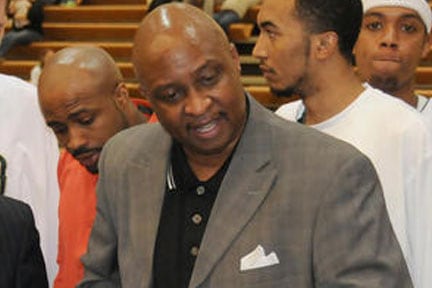 As USAO celebrates 40 years of athletics in Chickasha this year, it’s fitting to take the time to recognize a person that has been associated with the program for nearly the entirety of those four decades.

Men’s basketball coach Brisco McPherson will on the sidelines at the USAO Fieldhouse Thursday night coaching the No. 14 Drovers against No. 9 Rogers State.  His next win will be his 300th as the USAO coach.

McPherson will be familiar with his surroundings.  He was at USAO in Year One.  But his contributions were not yet on this court, and he wasn’t there as the coach.

“I went for one year to junior college at Oklahoma City and played my final three years here,” McPherson said.  “And I guess I’ve been here pretty much ever since then.”

“Well, there was a three-year period between the time that I got here and now that I wasn’t affiliated with the university.  But it’s been about 37 years that I’ve been involved in some capacity at USAO.”

McPherson’s life has been about helping guide young people and athletics throughout.

“I was the program director for the East Side YMCA in Oklahoma City.  And I kept getting calls from administrators here (at USAO) that wanted me to come back and be a part of the coaching staff as an assistant coach.

“The first opportunity was for the men’s team and the second call came about the women’s team.  I turned them down at first, but after the third call, I reconsidered and came back.  I’ve been here ever since.”

And his consistency that McPherson has given to the school and its athletics department has helped to build the program into one that gains national recognition.

It wasn’t always that way.

“When we were first getting started, it was a brand new program,” McPherson said.  “It’s kind of funny.  Back then everyone wanted to schedule us because they thought it would be an easy win and they could run the score up.”

“As we got better and of course after we won the national championship, we tried to schedule people and they didn’t want to play us.

“The athletic program has just gotten better as the years have gone on – in all of our sports – and when people play us they know it going to be tough.”

The Drovers started playing in Drover Fieldhouse in the 80’s and the program continued to improve.

But McPherson led the Drovers back to the national title game the next year.  USAO defeated Oklahoma Baptist, 96-79, giving the school its only national championship.

The 2002 Drovers men’s basketball team were inducted into the Hall of Fame as a team in 2012. Graphics courtesy USAO Sports Information Department.

“Definitely winning that championship is one of the proudest moments,” McPherson said.  “I know coaches that have coaches for 30 years or more and have never had that chance.  I just feel fortunate to be able to say that I was a part of a national championship team.”

McPherson acknowledged that the job entails highs and lows.

“Every year you get different kids in,” McPherson said.  “The upside is that you hope you get good kids.  And they come in and they do what they’re supposed to do and graduate and you have a good season and things like that.

“The down side is that sometimes you have kids that aren’t committed academically or athletically.  Sometimes you get kids that don’t make quite the right judgments on things and that’s the downside of things.  But you just hope that you’re able to help some kids along the way – that you can help them get a degree and help them for later on in their lives.

“That’s the main focus for us here, is that we get kids to come through this department and they participate in athletics, but ultimately we want them to get their degrees and to have better lives.”

McPherson – who also coached tennis for a short time at the school – has added the role of athletic director to his responsibilities.  He is proud of what he can promote about USAO when recruiting young people to come to Chickasha.

“The entire university is committed to excellence,” McPherson said.  “And all you have to do is read about the accomplishments that USAO has had over the years.  And now we are one of the top academic institutions in the country.

“When we recruit kids, we talk about athletics, but we really talk about the quality education that they are going to get when they come to USAO.  It’s second to none.  And we really push that, because that is something that parents are concerned with.  They want their children to come here and to actually earn a degree.  It’s more than just a temporary arrangement to play athletics.

“You can play athletics for only so many years.  Once you earn a degree you can use that for a lifetime.”

And McPherson said that he believes the coaches he has worked with through the years have helped to make the last 40 years great.

“I think we’ve continued to get good kids and good athletes,” McPherson said.  “But I think we’ve had good coaches.  I think our coaches have always been committed.

“And I’ve worked with some good coaches like Gene Davis and Paul Hansen, and other coaches that we’ve brought in.  Jimmy Hampton, our soccer coach is a really good coach.

So McPherson continues to lead on and off the court.  And he is excited that he and his coaches and the faculty and administration are all on the same page.

They are looking to inspire young people into and guide them with excellence.