Methinks thou dost protest too much 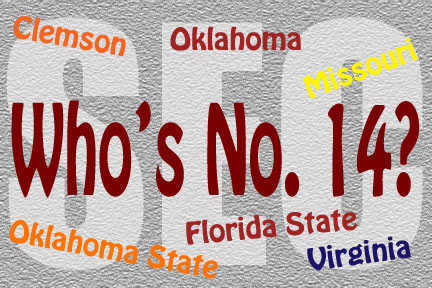 I’m a trusting person.  It’s just the way I am and it’s the way I was brought up.

Generally, I take things at face value (certain friends’ perceived sarcasm notwithstanding) and if someone says something, I have a tendency to believe them and act accordingly.

But the scene that is playing out on the college landscape right now is one about which I just don’t get a good vibe.

Texas A&M is likely going to leave the Big 12 and move to the SEC, if this isn’t already a done deal.  See, I’m already skeptical.  And although I would be sad to see the Big 12 fall off the map – leaving a gaping hole in the center of the country in which there is no major conference – it’s the other colleges on the outskirts of the SEC that are causing me to feel things other than sadness.  Skepticism.  Suspicion.  Dubiousness.

If (when) Texas A&M goes to the SEC, it will be a given that a 14th team will be needed.  Schools are falling all over themselves to act as though they aren’t interested.  Some universities have denied contact so vehemently, a reasonable person might start to become SEC-athiest, as if the conference doesn’t even exist.

The Southeastern Conference is the premiere conference in college football.  Winning five straight national titles takes away much from any other argument.  Yes, membership  a very tough schedule, but the conference is so tough that a team can lose one, or even two games (LSU was 12-2 in 2007), and still play in the BCS title game.

And there are schools in the geographical vicinity that don’t want to be a part of that?  Many athletic directors would give up their executive washroom key to get an invitation to that party, even if they were showing up fashionably late.

So I’m somewhat distrusting when representatives from Clemson and Florida State are coming out and saying that there is no interest whatsoever in moving out of the Atlantic Division.

And Missouri?  When the Big 12 officially implodes, Mizzou, Iowa State and the two Kansas schools will be left to drift in the wind.  And the Tigers are denying that they are even thinking about a move?  I don’t think so.

Of course, presenting a state of denial while acting behind the scenes in a completely different manner is something that is not new to the SEC.  (Full disclosure: I’m actually a fan of the SEC and some schools in particular, but I’m calling it like I see it.)

In late 2006 and into 2007, then-Miami Dolphins head coach denied repeatedly that he would be taking his talents out of South Beach.  Day after day on SportsCenter, the American public was told that Saban was not in discussion with folk in Tuscaloosa.  On Jan. 4, 2007, Saban got off the plane in Alabama as the head coach of the Crimson Tide.  And the repercussions?  None.  He just doesn’t talk about it nowadays.

Another SEC coach left the NFL after protesting that he was staying.  But after a while of securing his membership in the Liars’ Club, he just gave up the denial route and left the Atlanta Falcons before the 2007 season was even finished to take the lead role with the Arkansas Razorbacks.  And walking out on the Falcons before the end of the season is an atrocity for another column.

So it seems that lying about intentions is a way of life in the Southeast when college football is involved.  How cool would it be to see some representative step up and say, “Well, yeah!  We’d love to go, but we need to honor our commitments, so we’ll probably stay here.  But yes, that would be awesome!”

OK, so maybe that was over the top.  But honesty would be a refreshing change of pace.  And someone may just bring it back in style in the future.

But for now, forgive me.  I’m not really buying any of it from the schools that say they’re not at all interested in a move to the SEC.  Let’s wait until one of them gets asked to the dance to see if there was a dress waiting in the closet for just such an occasion.