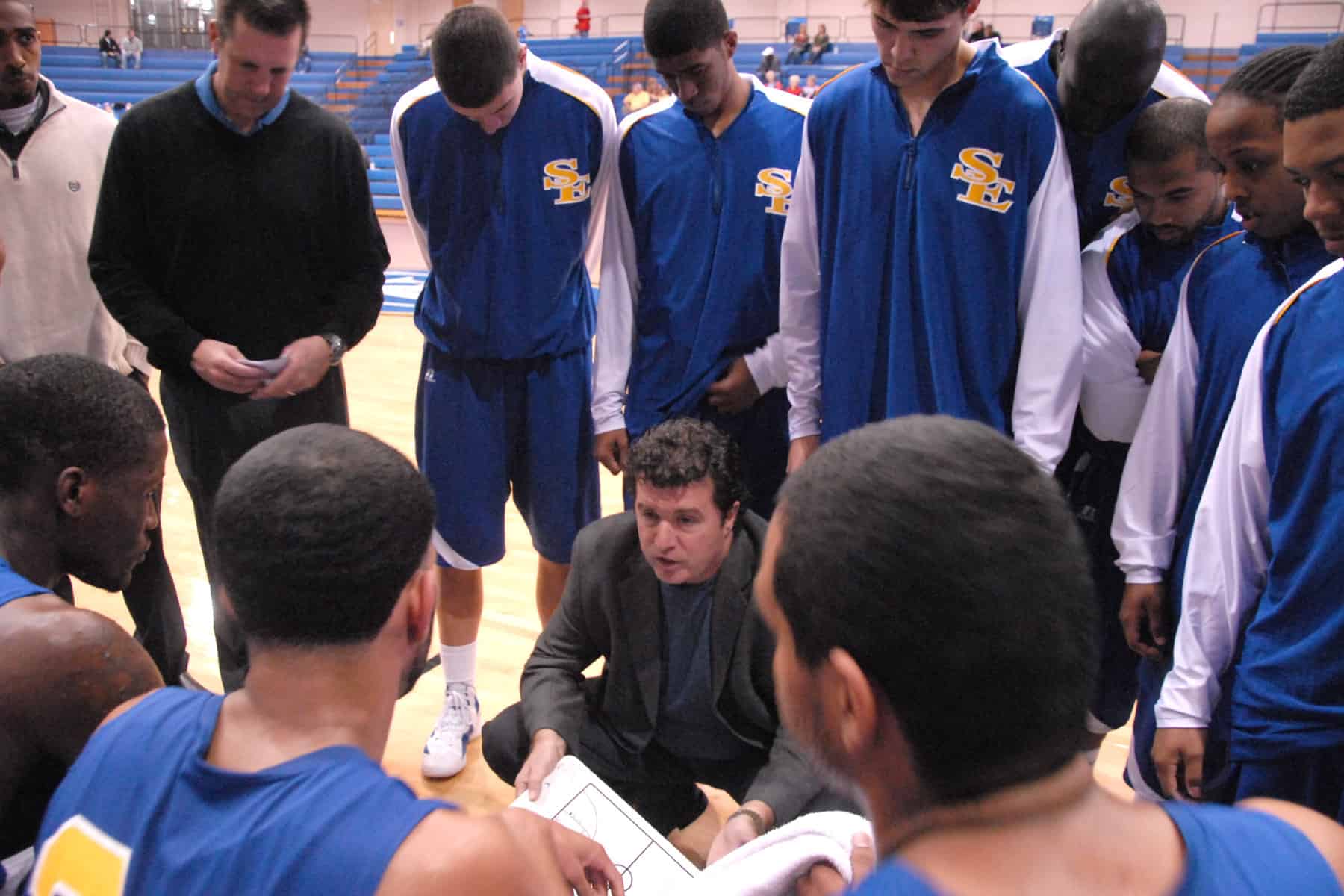 Southeastern has a new coach for the first time in two decades and is entering a new conference, so change has been a companion of the men’s basketball team this year.

But the Storm’s new lead man, Kelly Green, points out that big change is a part of what happens each season for every team.

“Change happens every year,” Green said.  “I think that if you look back over the years, in most years there will be substantial change.”

And Green is still trying to find, and keep, that right combination on the court.  His assessment of the season reflects that search.

“We’ve had ups and downs,” Green said. “We’ve some injuries at different times.  Just trying to settle on a rotation of guys has been a little difficult.

“We’ve had a combination that works and then someone might go down with an injury or somebody’s play might be quite as good on a consistent basis so we try to implement somebody else.”

But Green understands that even with the constancy of change, there are growing pains.

There are five holdovers from the Storm’s 2011-2012 campaign, and two of them have been able to contribute in large amounts to the team.  Juniors Urald King and Chris Roussell have found their way into the starting rotation.

King is averaging 12 points per game.  He also leads the team in rebounds, pulling down more than eight boards per contest.  Roussell scores 7.2 points per game and is tied for the team-lead in steals.

“Those two are the most experienced players here at Southeastern and, on the NCAA Division II level, of all the players we have,” Green said.

And the coach’s praise of his players extends beyond just their output during the games.

“And they are both very much quality people.  They have been excellent leaders academically and socially.  And their work ethic on the court has been really good. They are just quality individuals.”

The Savage Storm is 7-13 on the season, the best output at this point in the year since 2006-2007.  Southeastern finished 27-5 that year and made a trip to Sweet Sixteen.

Southeastern is 3-5 in Great American Conference play at the halfway point in the conference slate.  But after a three-game losing streak, SOSU has won back-to-back contests.  Green got a win over archrival East Central in his first opportunity on Saturday, and the Storm defeated Southwestern two nights prior with the season’s largest margin of victory.

“We got it handed to us on the trip before (to Arkansas Tech and to Harding),” Green said.  “But to our guys’ credit, we came back and had a couple of good days of practice.  And then we played extremely well at Southwestern.

“We turned the ball over only six times and we shot an outstanding field goal percentage (59.6 percent) and needless to say, it was our best game of the year.”

Southeastern will play five of its last eight games at home.  But that may or may not be a good thing for the Storm.

“One thing that’s kind of funny about our team is that we seem to concentrate better on the road,” Green said.

“Maybe it’s because we were on the road often early in the year and it kind of forced us into it.  We lost some of those games, but they were close.”

But Green knows that in order to finish well, the Storm has to change that trend.

“We have to understand that we will have to come out with the same focus and the same attention to detail,” Green said.  “It’s got to be the same energy at home.”