Mike Hammett Hired as New ‘Voice of the Bulldogs’ 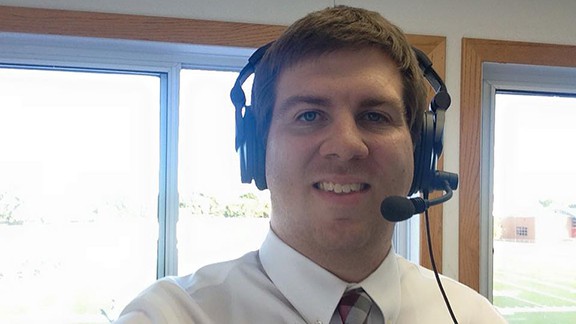 WEATHERFORD, Okla. – Following a national search, the Wright Wradio Network has selected Mike Hammett as their new Sports Director. As part of his duties, Hammett will be the new ‘Voice of the Bulldogs’ and serve as the primary radio play-by-play broadcaster for SWOSU Football along with Men’s and Women’s Basketball.

Hammett replaces John Liddle, who has served as the ‘Voice of the Bulldogs’ since August 2008. Liddle departed from Wright Wradio earlier this summer to accept a position covering his alma mater, the University of North Texas.

“We will certainly miss John Liddle, no question,” Heston Wright, General Manager of Wright Wradio, said. “He has done an outstanding job leading our sports team the past eight years and really set the bar high in all aspects of the position. We wish him and his family nothing but the best in their new endeavor.”

Hammett comes to Weatherford from Salina, Kansas, where he has worked as the Sports Director at Alpha Media since July of 2011. While in Salina, he has been the play-by-play voice for Kansas Wesleyan University and local high schools while providing morning sportscasts for four radio stations on their network. Hammett has also worked as a fill-in broadcaster for Kansas State baseball the past two seasons. He got his start in broadcasting at Eagle Radio in Hays, Kansas, as the Assistant News and Sports Director from 2008-11.

“It’s an exciting time for my family and I as we look forward to joining the Wright Wradio Network and the Weatherford community,” Hammett said. “Play-by-play broadcasting is my passion and the chance to do so at SWOSU and gain experience at an NCAA Division II school is such a great opportunity. I can’t wait to get started!”

A native of Marysville, Kansas, Hammett is a two-time recipient of the Oscar Stauffer Sportscaster of the Year award, which is presented by the Kansas State High School Activities Association, earning the honor in 2011 and 2016. He has also earned multiple awards for his play-by-play and sportscasts from the Kansas Association of Broadcasters. Hammett is a graduate of Fort Hays State University, where he earned two bachelor’s degrees in 2008.

“We’re excited to welcome Mike Hammett to Wright Wradio,” Wright said. “We know his experience in sports broadcasting will add a new element to the local sports scene. Along with being the Voice of the Bulldogs, he’ll broadcast Weatherford Eagle Sports and host a daily sportscast on each of our stations. We know he is capable of getting the job done and making our broadcasts great!”

The first day for Hammett at Wright Wradio will be on Monday, August 29th and SWOSU fans will get to hear the new ‘Voice of the Bulldogs’ for the first time on Thursday, September 1st when the Bulldog Football team faces Southern Arkansas in the ASAP Kickoff Classic. All SWOSU Football games will again be carried live this season on KWEY 95.5 FM ‘The Coyote’ in Western Oklahoma and online at KWEY.com.