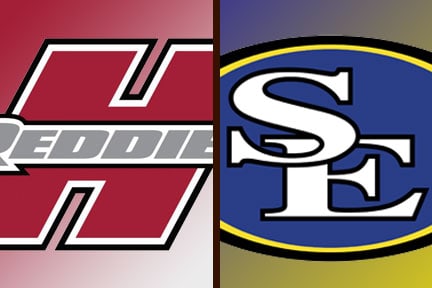 DURANT – Southeastern outgained Henderson State 407-to-272 and forced four turnovers, but fell victim to missed opportunity and 13 penalties en route to a 23-16 loss in the season opener on Thursday night at Paul Laird Field.

The Savage Storm slip to 0-1 overall and in Great American Conference play and will have an extra-long game week to prepare for a road matchup with preseason league favorite Ouachita Baptist on Sept. 12 in Arkadelphia, Ark.  The Tigers were 31-24 winners over East Central on Thursday night.

The defense was stout, led by Raheem Wilson who tallied seven stops to go with an interception and a blocked PAT, holding the Reddie offense to 276 yards, its lowest offensive output since the 2011 season.

He was joined by Kevin Jones who racked up seven stops, while Nicholas Sierra was right behind with six, including a half-tackle for a loss.

Ryan Polite tossed for 295 yards and a touchdown while completing 24-of-39 passes with one interception.

Kaymon Farmer was his most frequent target with nine catches for 70 yards, while Franky Okafor hauled in five receptions for a game-high 80 yards and a touchdown.

Chance Grayson added 59 yards on three catches, while Ty Miller chipped in 51 on a pair of grabs.

The Storm rushing attack cleared the 100-yard mark as a team, with four rushers putting together 112 yards, led by Ronnie Green who had 47 yards on 11 carries with a touchdown.  Devlon Wortham added 26 yards on 10 carries, while Nelson Akinwande chipped in 23 yards on eight rushes.

The defense held HSU’s Dallas Hardison to 160 yards passing and picked him off twice, but he was able to complete 19-of-28 passes with one score.

Jaquan Cole led the Reddies with a game-high 84 yards rushing on 17 carries with a touchdown.

The problems for the Storm came in the form of penalties where they racked up 13 flags for 107 yards, with 10 of those coming in the first half which saw SE convert four first half turnovers into just 9 points.

The first of those points came after Wilson picked off a pass in HSU territory and returned it 23 yards to the 15 yardline, but a penalty during the return would start the drive on the 25.

The Storm could not pick up a first down, but Jake Walters was able to connect from 37 yards out to give SE a 3-0 lead.

The Reddies would answer with a rushing touchdown in the second quarter and later take advantage of one of the three Storm turnovers to add a 10 yard Hardison to JaVante Mack touchdown pass for a 14-3 lead.

Southeastern would end the half though by forcing a Hardison fumble that was recovered by Clay Waters with 1:04 to go in the half.

SE would then march the ball down the field on seven plays thanks to a third-and-six conversion to Grayson before Polite hit Okafor for a 36 yard touchdown with six seconds to play in the half.  However, a missed PAT would leave the Storm trailing 14-9 at the break.

HSU would add to its lead, taking advantage of SE’s third turnover of the game and march the ball 31 yards on five plays with Cole scoring from 10 yards out, but a Wilson block of the PAT left SE down 20-9 with 8:31 to go in the third.

The Storm would mount its longest drive of the game, going 90 yards on nine plays, including a 45 yard completion to Miller, before Green scampered in from 14 yards out to close the gap to 23-16.

SE’s defense would force a three-an-out on the next visitor possession to give the Storm the ball with 7:08 to play.

Southeastern would then put together a huge drive, first converting on third-and-six with an 18 yard completion to Jordan Gill and later converting on fourth-and-10 with a 25 yard pickup to Farmer down to the HSU five yard line.

However, the Storm would be denied as they were unable to break the plane in four tries and turned the ball over on downs at the three yard line with 52 seconds to play, sealing their 23-16 loss.