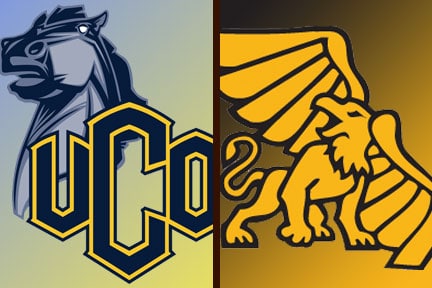 The Bronchos trailed 7-0 when Levonte Douglas intercepted a pass on the run at the UCO five-yard-line. Douglas downed the ball in the end zone for what appeared to be a touchback, but officials ruled that he ran in and scored the play a safety for the Griffons to make it 9-0.

MWSU got the ball right back after the free kick and scored on a three-play, 62-yard touchdown drive against the stunned Bronchos to go ahead 16-0 before adding a last-second field goal for a 19-0 halftime advantage.

The big-play Griffons made it a commanding 26-0 lead on a 76-yard scoring pass early in the third quarter and then held off a furious UCO comeback in dropping the Bronchos to 0-2.

“We made a lot of mistakes on both sides of the ball and just didn’t play a very clean football game, which you can’t do against good teams,” head coach Nick Bobeck said. “It’s a disappointing loss, but we’ve got to put it behind us and move on.”

Linebacker Malcolm Howard made 13 tackles, linebacker Ben Jones scored on a fumble return while adding nine tackles with two sacks and tackle Kenny Allen had nine stops with one for loss to lead the defense.

UCO appeared out of it after falling behind 26-0 minutes into the second half, but got back in the game with 16 unanswered points before running out of time.

Seth Hiddink’s 43-yard field goal with 5:06 left in the third quarter cut the deficit to 26-3 and UCO missed out on two golden scoring chances early in the fourth period.

A 21-yard Eckert run helped the Bronchos reach a first-and-10 at the Missouri Western 17 before an end zone interception ended that threat and UCO was in business minutes later when MWSU’s punter touched his knee down at the Griffon eight.

The Bronchos lost nine yards on a penalty, sack, short run and incomplete pass to give the ball back at the 15.

UCO’s defense came through two plays later, forcing a fumble that Jones picked up at the 15 and he waltzed untouched into the end zone for the score. Hiddink’s extra point made it 26-10 with 8:36 remaining.

Stallard’s two-point conversion pass to Harger was stopped short of the goal line to leave the Bronchos in a 26-16 hole with 4:37 remaining.

MWSU picked up two first downs — one via penalty and one on a 20-yard run on third-and-eight – to run off more than three minutes and clinch the win.

UCO had a pair of good first-half scoring opportunities, but Stallard was picked off at the one to thwart the first chance and Hiddink was just short on a 49-yard field goal try minutes later after the Bronchos forced MWSU into a quick punt following the interception.