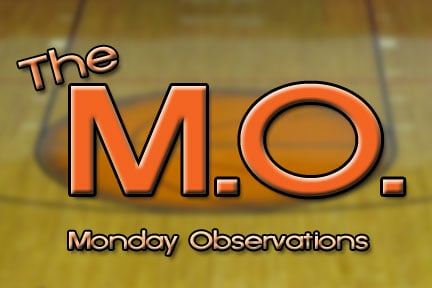 • Here’s to celebrating my favorite sporting event of the year – the NCAA Tournament.  I’ve seen every championship game since watching North Carolina State upset Houston in 1983.  Yes, that means I got in things right after Michael Jordan’s game-winning jump shot the year before, but I still got remember like it was yesterday the game that made for One Shining Moment.  (By the way, CBS played All Right by Christopher Cross with its post-tournament highlights following the game.  One Shining Moment didn’t make its debut until 1984.  And yes, I remember that.)

Clyde Drexler was, as still is, my favorite player and I was so disappointed to watch Lorenzo Charles put that shot in as time expired.  But with 30 years of retrospect, I can see how big a deal that win was and what it meant for college basketball as a whole.  The ESPN 30 for 30 documentary on that N.C. State team that has been airing is well worth the watch and brings into clarity how impressive that run to the title was.

So here’s to Louisville and Michigan.  Here’s to Rick Pitino and possibility of winning national championship at rival schools and to John Beilein and his club erasing, or at diluting the memory of calling a timeout when there are none left.  Here’s to Jim Nantz and a well-crafted championship call at the end of the game.  And here’s to watching one more men’s college basketball game before the six-month college basketball game drought begins at around 11 p.m.