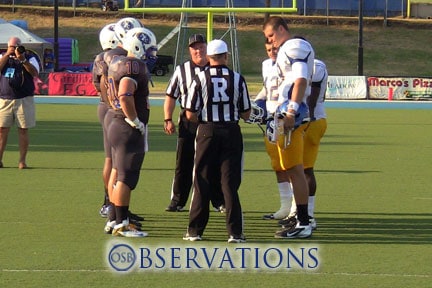 • It’s been since 2009 that Oklahoma has had a winless football team. East Central went 0-11 four seasons ago.
Right now, there are four teams trying to avoid that distinction for 2013 and all are in Division II: Central, Northeastern State, Northwestern and Southern Nazarene. All four are 0-7 after this weekend’s games.
But even in a worst-case scenario, the most oh-fer teams there could be would be just two,  as NWOSU and SNU square off on Nov. 9 and  UCO and NSU meet the final week of the season for the Governor’s Cup on Nov. 16.
Northeastern State has seen a winless season in the 2000’s, going 0-10 back in 2004, and would like to avoid repeating that in less than a decade.
Central last went without a win back in 1989. The Bronchos were 0-10-1, tying Southeastern 12-12 in the season opener in Edmond. (I was at that game. It was a rainy night and my first game to support my team as a college student.)
It’s been much longer for the Northwestern program. The Rangers have been 0-7 four times in their history, but finished winless last in 1947. The 0-7-1 squad salvaged a tie with East Central in the season’s final game.
Southern Nazarene has never had a winless season. The school’s football program started in 2000. In fact, the 2-9 record from last season – a schedule that was most Division II schools for the first time – gave the Storm its lowest win total.
Each of the four schools have a schedule that was front loaded with very tough teams. We’ll see how they fare as the season grinds on through injuries and other challenges if they can each break into the win column in 2013.

• Be sure to check out the basketball previews all month long on the OSB Podcast!