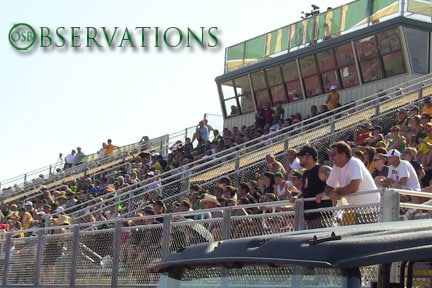 • Northwestern fell from the ranks of the winless.  Wait, that doesn’t sound right…

The Rangers secured their first victory in 2013 with a 25-21 win over Southeastern on Homecoming.  Big game performances from Reid Miller and Jarion Tudman, along with mental lapses from the Savage Storm, paved the way for the NWOSU win.

Tudman, a redshirt freshman, had 118 yards on 14 carries and scored his first two collegiate touchdowns.  And he was the team’s second leading rusher.  Quarterback Reid Miller racked up 121 yards on the ground, with more than half of that coming on a 65-yard  sprint to the endzone late in the third quarter, giving the Rangers what proved to be the winning score.

Southeastern didn’t help its cause due to penalties.  SOSU and NWOSU were very close in total yards gained (slight edge to the Rangers 471-463), but the Savage Storm amassed 22 penalties, with 18 of the calls coming in the first half. [Can someone tell me if that’s a record?]

• Langston and Bacone have looked to be on a collision course for supremacy in the Central States Football League this season and each team did its part to keep the clash in two weeks a huge game.

Langston is now 3-0 in CSFL play, its latest win a 53-7 blowout of Oklahoma Baptist on Saturday.  Freshman quarterback Mark Wright, Jr. was 17 of 23 through the air with two TDs and have a rushing touchdown to go with that.  The Lions have won three straight since the brutal opening portion of their schedule against D-I opponents on the road.

Bacone broke into the NAIA Top 25 – at the No. 25 spot – before Saturday’s game and looked like it deserved the ranking with a 49-13 victory over Texas College.  The Warriors were up 21-13 at the break, and blew it open with 28 unanswered in the second half. Senior Kyle Kuban has two passing touchdowns and junior linebacker Keshaun Malone returned an interception 47 yards for the Warriors.

Langston is on the road at OPSU this week, while Bacone hosts OBU before the big game at the Indian Bowl on Nov. 9.

• And then there were three.

With the Northwestern win this weekend, there are now only three winless teams in the state.  Central (was idle Saturday), Northeastern State (lost to Central Missouri, 51-7) and Southern Nazarene (lost to Arkansas-Monticello, 22-19).

• Oklahoma is back in the top 10.  The Sooners moved into the No. 10 spot in the latest BCS ranking after their 38-30 victory over Texas Tech on Saturday.