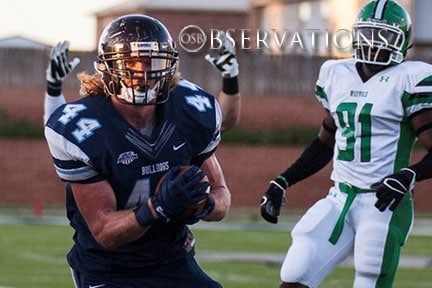 The final week of football for D-II and NAIA schools in Oklahoma is in the books.

→ NSU held on for the win over UCO, 45-38, in a wild back-and-forth game that went to the wire.  The RiverHawks picked off UCO’s T.J. Eckert five times, though the Bronchos still owned a 380-206 advantage in the passing game.  Both teams combined for more than 1,000 yards of offense.
The RiverHawks keep the President’s Cup for a fourth straight year.  However, the win was not enough for coach Kenny Evans to keep his job.

→ ECU also moved its winning streak to four as the Tigers retained the KTEN with a 23-16 win over Southeastern.  The teams were tied at 9-9 going into the intermission.  But East Central took advantage of two SOSU turnovers on the Savage Storm’s first possessions of the second half and converted on both, using the touchdown as the go-ahead and stay-ahead scores.

→ An incredible six-miute stretch in the third quarter saw the Southwestern Bulldogs score four touchdowns (in less than two minutes of game time with the ball), putting the game completely out of reach.
Dustin Stenta passed for four touchdowns.  One of those was to Ryan Corbin, to go with the two he had rushing.
Southwestern has won five straight in the series and with the victory closed out the year at 6-5, the first winning season since 2007.

• Langston defeated Wayland Baptist, 33-0, on Saturday and finished the regular season at 6-4.  It would also be the end of the season for the Lions, who were left out of the 16-team field playing for the NAIA Football Championship.

Langston wound up ranked No. 21 in the final NAIA poll.  Teams clinch automatic berths into the Championship Series only by winning a conference championship and being ranked in the top 20.

My Observation is that being left out of the playoff field was a disservice to the Lions.

Langston was 6-0 vs. NAIA opponents and finished the season on a six-game winning streak.  All four losses were on the road and to NCAA Division I teams.

Coaches are often chided for scheduling patsy teams to build up a record that looks good on paper, when in reality playing inferior opponents doesn’t help a team get better for an end-of-the-season run.  Coach Sanders did not do that.  In fact, the opposite was true, and Lions proved it to be the case, getting stronger each week while facing teams on a level playing field.

It seems less than fitting that Langston was left out of that group.

It also seems to send the message that taking on tough opponents is not really in your program’s best interest.