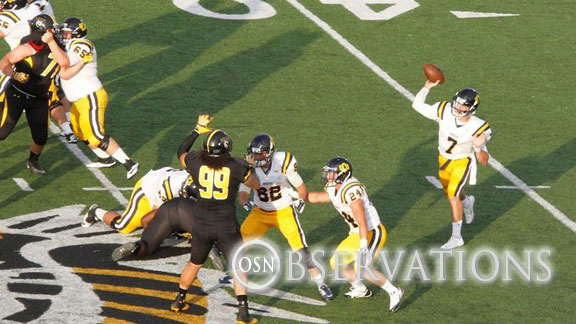 The M.O. is back. Here are some observations to start the week.

• Oklahoma Wesleyan volleyball is off to its best start in school history.
The Lady Eagles, now 8-0, took four matches at the Central Kansas Volleyball Invitational last weekend and then followed that with four more wins in their invitational this weekend, including a win over in-state opponent Bacone and the second victory this season over in-state rival Southwestern Christian.
The OKWU write-up can be found here.

• It’s tough to label one of the eight Thursday night college football games involving Oklahoma schools as the “Game of the Week.” But OSN is going with Fort Hays State at Central.
The Bronchos went 8-4 last season; the Tigers were 7-4. UCO burst onto the scene with a 26-7 win at Hays to open 2014. But the Bronchos aren’t going to surprise anyone this year. The course of this year could be shaped by the outcome of this game. Can UCO have another great year with the target on its back?

• And finally, I’m looking forward to being back in the broadcast booth.
My Fridays this fall will give me the chance to see a lot of football in the Oklahoma City area. I’ll be the play-by-play man for the Game of the Week that will air on KSBI Channel 52. And on Saturdays (and this Thursday night), I get to get back on the call of Southeastern football as the color analyst on the new Southeastern Sports Network.