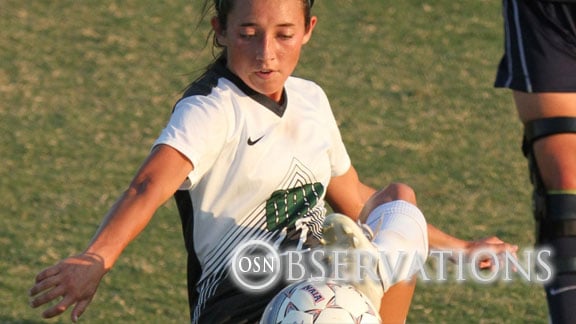 It’s a Labor day edition of the M.O. Have a great day and keep it safe.

• The opening weekend of athletics for Oklahoma Baptist couldn’t have gone too much better, as the Bison made their debut in D-II and let people know they are ready to roam in their new national affiliation.

The women’s cross-country team opened its season with a win at the UCO Land Run. Abby Hoover finished second in the 5K and the Lady Bison had four of the top eight runners – Miranda Dent, fifth; Sydney Lawrence, sixth; and Emily Sechrist, eighth. The men’s cross country team took fifth in the event and Clay Shepperson led his team with an 18th place finish.

The football team took nationally ranked Harding to overtime, before falling 20-19 in the extra period. The Bison matched touchdowns score for score with the No. 21 Bisons, and definitely drew attention around the new league and the region.

And the volleyball team went 3-1 on the weekend in the Nova Southeastern Invitational in Fort Lauderdale, Fla. The Lady Bison had wins over Westminster College, Virginia State and Eckerd College, before falling to Emery-Riddle. OBU is tied at the top of the GAC standings with its overall record.

The Bison are showing D-II why they have won the Learfield Sports Directors’ Cup for three straight years.

• I got to see Mustang quarterback Chandler Garrett first hand on Friday night in the Broncos’ win over Yukon. He lived up to what I’ve been hearing over the summer. He used every bit of his 6-foot-5 frame to lean in for his lone rushing touchdown of the night. And he put the ball right where it needed to be as he passed for five more touchdowns on the evening. Mustang racked up 10 touchdowns and won the rivalry game, 72-36.

• Just one high school softball team remains undefeated in Oklahoma. Southmoore defeated Choctaw, 2-1, to move to 18-0 on the year.

Washington fell from the ranks of the unbeaten with a 2-1 loss in extra innings to Lone Grove in the Plainview Tournament final.

• It’s been rare lately when I get to go watch a game just to go, but I went with my wife to see the Sooners play on Saturday as a part of Band and Spirit Day. We went with cheerleaders from the high school and spent the afternoon and evening in Norman. And I don’t often complain, but it’s just not my nature.

But… I think I found something I haven’t experienced before. I found the worst seat in the stadium.

Yep, I think that’s it. Facing west on an early September evening doesn’t help on a hot day, and not being able to see the SoonerVision video-board without having to stand up was tough because I didn’t want to block the view of those behind me. Also, our instructions were to come in at Gate 1, which isn’t the right gate to come in at, and trying to get to the other side of the field while navigating the route laid out with the construction in the south part of the stadium was challenging at best.

Again, but… That’s just my observation. The Sooners won. We got to Norman and back safely. And I spent time with my wife and visited my daughter while I was up there. That’s not a bad Saturday