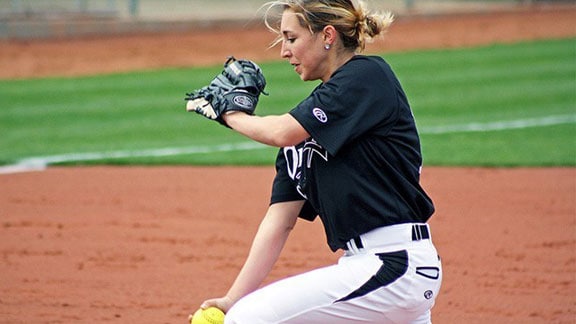 • After taking both games of a No. 1 vs. No. 2 doubleheader vs. St. Gregory’s, OCU softball has solidified its spot at the top of the NAIA rankings. And the numbers that accompany the winning go right along with the pace set on the diamond.
The Stars are now 48-1 on the year with winnings streaks of 29 games and currently 19 games.
The top three pitchers for OCU are putting up ridiculous numbers. Georgia Wall has given up only six earned runs this year and is leading the NAIA with and ERA of .043 and Abby Meador is in third at .086. The Stars own three of the top five spots in the country also in opponents’ batting average: Meador, .016 (1); Leslie Miller, .138 (3); and Wall, .140 (5). Meador has struck out 191 batters and her average of 11.80 per game is second in the country.
Meador is also tied for seventh in wins this season with 20, and no losses. Wall is 15-0 and Miller is 13-1.

• Rogers State can’t compete yet for a conference title, but sent its golfers as individuals to the Heartland Conference postseason tournament. After a rain shortened Day One, Patrick Bart and Aaron Davis are tied for 12th at 3-over-par. Bart had nine holes in and Davis had 12.
Oklahoma Christian was in second at plus-9 as a team with the first round still to be finished.