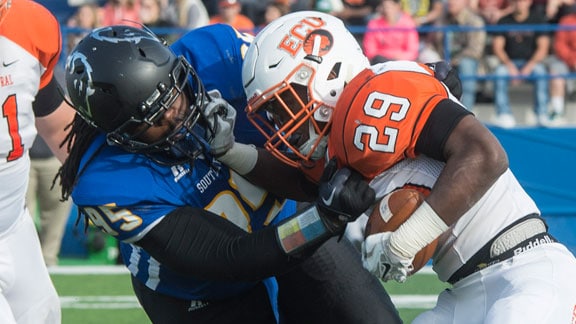 The M.O. is back with still football to talk about. And some basketball observations, too.

• The streak is over. And a rivalry may have been born.
Southern Nazarene finally put a halt to the losing streak that had run to 32 games. And appropriately, it took 33 points to do it. SNU outlasted Oklahoma Baptist, 33-32, in overtime in Bethany on Saturday. The Crimson Storm opened up a 16-0 lead, but OBU didn’t go quietly. The Bison scored as Dez Stegall found Josh Pettijohn for a 29-yard touchdown reception with 30 second left and went up 26-23, but the ensuing PAT was no good. SNU quickly went down the field and Carlos Anguiano connected on a 35-yard field goal as time expired to tie the game at 26 and send it to an extra session.
Sophomore Terrance Olds had 160 yard rushing and the Crimson Storm’s score in overtime, a 25-yard TD run. OBU answered when Stegall took it in from two yards out, but the Bison failed to convert going for two points and the win.
And while SNU and OBU have been conference rivals, previously in the Sooner Athletic Conference and now in the Great American Conference, the two had never met on the football field. In a rivalry weekend in the GAC, the matchup with a series record of 0-0 may have provided the most drama.

• Central and Washburn went down to the wire and beyond in the final match of the MIAA regular season with the league championship on the line. In a fifth set that went well past the 15 points necessary, UCO finally pushed past WU, 26-24, for the win and the conference season championship. The Bronchos are now 28-3 and 16-2 in the MIAA. UCO will host Emporia State on Tuesday night in Hamilton Field House and with a quarterfinal win will host the remainder of the league tournament.

• Excitement around the state in season openers of college basketball:
→ Cameron’s women rallied from down 11 points in the fourth quarter against Harding and completed the comeback as Caitlin Clancy hit a three-pointer with two seconds left to give her team a 66-65 win.
→ East Central and Concordia-St. Paul men went back and forth through the fourth quarter and ECU’s Sterling Thomas hit a three with four seconds left to put his team on top for good, 82-81.
→ Central and Northwestern men each had double-digit leads and each gave them up before finally going into overtime. UCO’s Jordan Landon drained a three from the top of the key as time expired and the Bronchos topped the Rangers, 74-71.

• Big wins for Oklahoma and Oklahoma State on Saturday. OU stopped the Baylor dominance with a 44-34 statement in Waco. OSU put bad memories behind them in Ames, with a 35-31 win, but it was a game contested to the end.
The Cowboys are up to No. 4 in both the AP and coaches’ polls. And both OU and OSU are heavily in the talk for a spot in the College Football Playoff. If both win this weekend, don’t be surprised to see College Gameday in Stillwater on the Nov. 28.

• Speaking of Bedlam, OU-OSU is the longest running college football rivalry in the state. The second-longest was renewed for the 99th time on Saturday in Durant.
East Central and Southeastern met in what is now being promoted as the Great American Classic and came into the day with the series as close as any series can be – tied. Each team had 46 wins and 46 losses with six ties along the way. And this year’s game was a tight one, too.
ECU went up 14-0 in the first quarter, then SE scored the next 24 points. Southeastern trailed 24-21 entering the final stanza, but got two field goals and a touchdown on consecutive possessions and Kent London intercepted Rocky Moore twice in the end zone to preserve the 37-27 win.
The victory gave SE a winning record for 2015 at 6-5 and, at least for now, a winning record in the series, 47-46-6, with the 100th edition of the rivalry coming up next year.