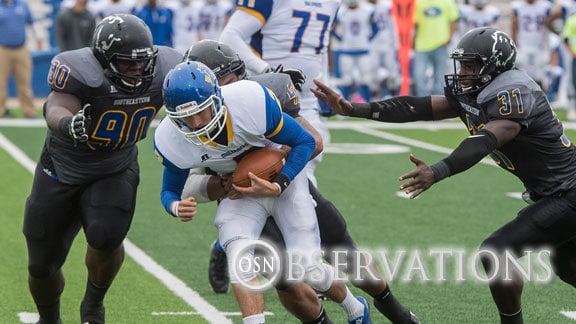 The first M.O. of the month of November is up.

• On the high school football front, there are few things cooler than a battle of unbeatens in Week 10. There are two of those this year on the way this week and they are both in Class B.
District 2 features Geary (9-0, 8-0) traveling to Alex (9-0, 8-0). The teams have combined to shut out their opponents to times and Alex has allowed only 20 points all season.
District 4 has Keota (8-0, 8-0) on the road at Dewar (9-0, 8-0). Each team has had a game in which it put at least 80 points on the board.
These two games are in this week’s poll surveying which game, if you could,  you would attend this weekend.

• I didn’t think that Oklahoma State would wind up with more on the scoreboard than Oklahoma this weekend. The Sooners were playing Kansas. Then there was the first quarter in Lubbock that ended with Texas Tech on top, 24-14.
But credit to OSU, that game was far from over.
Final totals for OSU and OU: 70>62.
The Cowboys remain undefeated at 8-0 and November is finally here. Here’s where it gets interesting.

• It’s amazing to think that Laura Milos is just a sophomore with the year she’s having for ORU volleyball. Milos put up a triple-double this week against last week against South Dakota State, and had 63 kills and seven service aces in two matches this week. The Golden Eagles are 13-12 overall and 7-5 in the Summit League with four matches remaining.

• Southeastern recorded eight sacks against Southern Arkansas. That’s a great feat in and of itself. But when you factor in that the Muleriders had allowed only eight sacks total against them in the previous eight games this season, it makes that number even that much more significant.

• The Thunder opened the season at 3-0. The win over the Nuggets was settled after halftime in the new “sunset” uniforms. But the first two wins showed the desire of the Thunder to win, with a gut check against the Spurs and a 2OT win at Orlando. This is a team that is playing like it’s trying to win 82 games in the regular season.

• My wife grew up within an hour of the Kansas City area. It’s been fun to watch the Royals take the World Series for the first time in 30 years. Stayed up to watch it and it was fun to watch.
Let’s go Rangers next year.