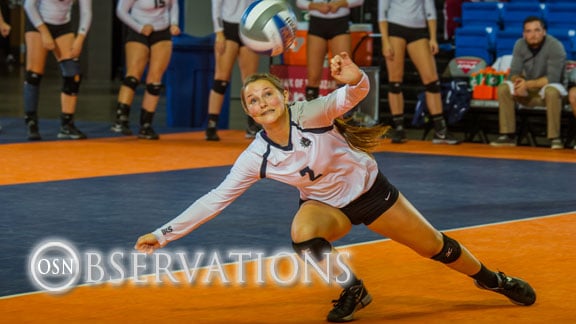 The M.O. as we head into Thanksgiving Week. Never forget there is always something for which you can be thankful!

• The men’s and women’s NAIA soccer championships started this weekend. Of the three teams from Oklahoma to compete in the national tournament, only Oklahoma Wesleyan’s men will move on to the second round.
OKWU defeated Concordia (Neb.), 3-0, and move to 20-1 on the year. The Eagles face Rocky Mountain (Mont.) on Monday at 6:30 p.m.
The USAO men were shutout by Bellevue (Neb.), 1-0, in the opening round. USAO’s women lost 5-1 to Martin Methodist (Tenn.). Morgan Wilson scored the team’s lone goal.

• Southwestern’s volleyball team claimed its first conference championship on Saturday. The Bulldogs took down Southern Arkansas, 3-1, in the championship match. Defense was the order of the day as SWOSU had 14 blocks in the match. Kelsi Schmidtberger set a GAC record with 20 blocks in the tournament. The Bulldogs dropped only two sets during the three matches for the weekend.
SWOSU setter Kayla Hebert was named the tournament’s MVP and Schmidtberger and Carly Zak along with Southern Nazarene’s Abbey Bell also made the All-Tournament team.

• Central Oklahoma fell to Central Missouri in the MIAA volleyball tournament championship Saturday in Edmond, but still might advance to the NCAA national tournament as an at-large bid. The selections will be announced Monday afternoon.
UCO fell to UCM, 3-1, in the title match after dispatching Emporia State and Washburn to get to the finals. Barbara Jackson had a career-high 33 kills in the final to average an amazing 8.25 kills per set.

• Mid-America Christian men’s basketball has started the season at a torrid pace. First-year head coach Josh Gamblin has guided the team to a 6-1 start and the Evangels are scoring 97 points per game and reached the 100-point mark in four of the contests, including the last two. Devonse Reed at 17.6 ppg and Nick Tate with 17.3 ppg are leading the way for MACU in scoring and Tate has 6.9 boards per contest as well.

• Tulsa men’s basketball got a statement win last week. The Golden Hurricane took down No. 9 Wichita State, 77-67, at the Reynolds Center. Shaq Harrison had 20 points and five rebounds in the victory. That should definitely be something to remember in March as bids to the NCAA Tournament are being considered.

• Quarterfinal and semifinal playoff games in high school football are set for Friday evening. The schedule can be seen here.

• And of course, Bedlam is this week. Both teams enter the contest with 10-1 records, but OSU’s doesn’t seem to have the same luster. Most likely it is because the sting of Saturday’s 45-35 loss to Baylor is still fresh. OU and OSU each still have a shot to enter the College Football Playoff with a win, but the Sooners’ chances earning that spot more likely. An OU victory on Saturday would push the winning streak to seven with a lot of momentum to boot.
But aside from the national picture, the game itself is what many fans across the state will be talking about all week.