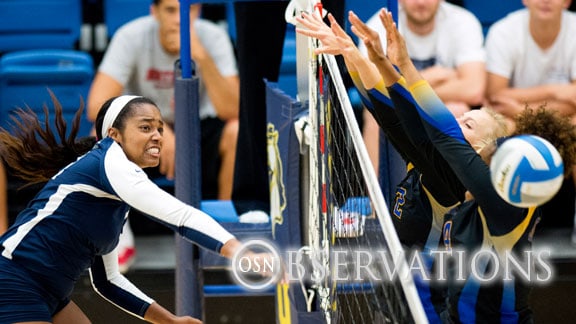 It’s been a few weeks since there have been observations in print. So here goes.

• Oklahoma Baptist football was picked to finish last in the Great American Conference in its first year with the full league schedule. That won’t happen.
The Bison are 2-5 in the GAC and have won two of the last three. OBU trailed 24-0 at NWOSU on Saturday before a pick-six by Devontrae Young from 37 yards out with 55 seconds remaining in the first half started a run of 27 straight points. OBU grabbed five interceptions on the day, including one by Brynden Pitzer that was run back 26 yards for another touchdown, which proved to be the insurance points the Bison needed for the 41-38 win in Alva.

• The UCO volleyball team seems to have forgotten how to lose. The Bronchos’ winning streak has reached 15. The most recent victory may have been the most dramatic in this stretch. No. 11 Central rallied at home to score the final five points in the decisive fifth set to win it 15-13 over No. 12 Nebraska-Kearney. Jordan Spence had 14 kills and Katy Davis had a season-high 55 assists against the Lopers.
The Bronchos at 21-1 and 9-0 in the MIAA are making quite a statement in one of the strongest volleyball conferences in Division II.

• Also on volleyball, Oklahoma Wesleyan picked up its 20th win of the season with a 3-0 sweep of McPherson. The Lady Eagles are now 20-6 and 9-4 in the KCAC.

• The third time was in fact the charm for Choctaw. The Yellowjacket softball team had lost to Southmoore twice in the regular season, but beat the Sabercats when it counted. Choctaw beat Southmoore, 6-1, in the Class 6A state semifinal and then outlasted Sand Springs, 4-3, in the championship game.

• It took four overtimes, but Southeastern scored 60 points for the first time since 1922 – a 63-0 win over Oklahoma Baptist. The Savage Storm lost 63-60 to Harding on Saturday in the longest football game in the program’s history.

• The 123 points put on the scoreboard in Durant weren’t the most in a football game in Oklahoma this weekend. And four overtimes wasn’t even the most extra sessions.
That distinction goes a Class B high school game played in Maysville. The Cyril Pirates and Maysville Warriors fought through SEVEN overtimes before Cyril finally came away with a 78-72 victory on Thursday night, combining for 150 points.