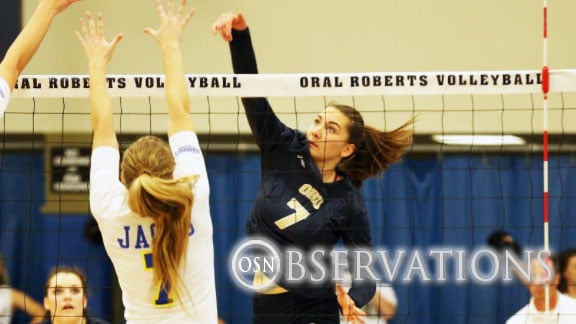 Monday Observations looking back on the week in October when the cool weather finally seemed to arrive.

• Props to the Oklahoma State football team for even playing the game. With all that went on around the campus and city of Stillwater concerning the tragedy that happened during the Homecoming parade, it really is something that the game went on as planned.
But it is not with precedent. In November 2011, the football team played at Iowa State a day after a plane crash killed four, including women’s basketball coach, Kurt Budke, and assistant coach Miranda Serna. The football game continued as scheduled on a Friday night, that in itself out of the ordinary. OSU lost to ISU, 37-31, in double overtime. It was the only loss of the season.
The Cowboys won on Saturday, 58-10, over the Kansas Jayhawks, in a game that suddenly seemed less important than the circumstances around it.

• Oral Roberts’ sophomore outside hitter, Laura Milos, is continuing to have a stellar season and had a record-setting night in a 3-2 win against South Dakota State on Sunday. Milos recorded a triple-double with 25 kills, 11 digs and an amazing 12 service aces. The 12 aces broke the school record of 10, which was put up by the Golden Eagles’ head coach, Sheera Sirola, in 1995.

• Defense was lacking with Oklahoma schools on the D-II level on Saturday, to say the least. And with the old statement that goes, ‘If you’re going to give up seven touchdowns, you’d better be prepared to score eight,’ none of these teams were able to pull it off.
· Northwestern over Southern Nazarene, 49-20 (Read below for more on SNU)
· Central Missouri over Northeastern State, 54-10
· Arkansas Tech over Southeastern, 57-37
· Harding over East Central, 62-20
· Tarleton State over Oklahoma Panhandle, 84-47

• A couple of streaks stopped in high school football in 6A-I. Broken Arrow won, 35-34, at Jenks to upset the Trojans and halt more than one streak. The loss capped these runs for Jenks: a 54-game home winning streak, a 26-game district winning streak and a 15-game overall winning streak. The streak of state championships won is still current and stands at three (2012-2014).
And the Norman Tigers got into the win column for the first time since September 2014. The Tigers stopped a 14-game losing streak with a win over Yukon on Friday night and there was no doubt. Norman got up early and led by 29 at halftime on the way to a 56-28 win.

• More streaks to talk about on the college level.
UCO volleyball pushed its winning streak to a school-record 16 games before falling to Washburn. The No. 10 Bronchos were swept by the No. 14 Washburn in Topeka, Kan., on Saturday night. UCO is now 22-2 on the year.
Meanwhile, the struggle is still real for SNU football. With the setback to NWOSU on Saturday, the losing streak for the Crimson Storm has now reached 30 games.

• All coach Jimmy Hampton is doing this year in the Sooner Athletic Conference is win.
The USAO soccer coach leads both the men’s and women’s teams in Chickasha and has guided them to identical 7-0 records in the SAC with two league matches remaining. The women’s current streak started with conference play, but the men have won 10 straight overall.
On a side note, Hampton is scheduled to be inducted into the USAO Athletic Hall of Fame in January. He has been with the soccer programs since they were started in 1998.