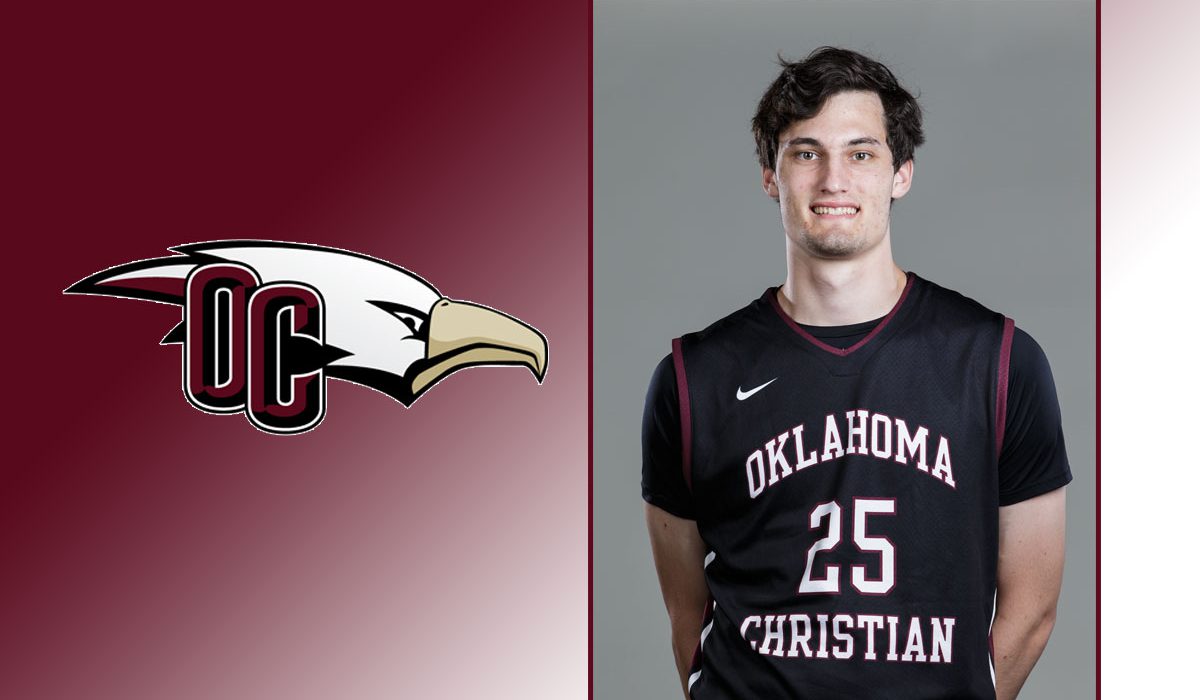 Moon, a record-setting 7-foot center for the Eagles from 2013 to 2017, was one of 10 people chosen for induction as part of the 2018 class for the Heartland Hall of Fame, with the nine others all coming from either St. Edward’s (Texas) or St. Mary’s (Texas).

Moon, from Crescent, will be formally inducted at halftime of one of the Heartland postseason basketball tournament championship games at Union High School in Tulsa on March 4. He will be the first former basketball player (from any school) to become a member of the Heartland Hall of Fame and the first former OC athlete ever to be inducted into any conference’s Hall of Fame.

“John Moon placed his named with the all-time greats in Eagle basketball history,” said former OC coach Dan Hays, who recruited Moon and coached him for three seasons. “He was the most game-planned-for player by opponents that I ever coached. He also distinguished himself as one of our most decorated student-athletes in OC history. That kid from Crescent, Oklahoma, certainly left a great mark in the history of OC athletics.”

The honor for Moon comes after he recorded one of the most impressive careers – both athletically and academically – in Heartland history. He became the first basketball player from the conference ever to be named to the prestigious Academic All-America first-team list by the College Sports Information Directors of America (CoSIDA), earning that honor twice.

He’s one of only six Heartland players ever to make an All-America basketball team, having received honorable mention as a junior on lists produced by the Division II Conference Commissioners Association and Division II Bulletin. At the conference level, he was a three-time All-Heartland selection, receiving first-team honors as a junior and senior – seasons after which he was named the league’s defensive player of the year.

“John is much deserving of this honor,” said current OC coach Cory Cole, who coached Moon as a senior. “He was a special big man on and off the court for OC. He impacted the game on both ends of the floor and was extremely durable too. He could run like a guard but finish like a big! I’m proud and happy for him to get this deserved recognition and honor. He’s one of the best ever to play in the Heartland, for sure.”

In addition to the All-America honors, Moon was a first-team All-South Central Region selection by both the D2CCA and National Association of Basketball Coaches in 2016 and a second-team pick by both organizations in 2017.

He made the All-Oklahoma Division II first-team list produced by the website OklahomaSports.net after his sophomore, junior and senior seasons and was named as the state’s Division II player of the year in 2016.

Moon posted three of the top 10 scoring games in Heartland history, topped by a 50-point outing against Oklahoma Panhandle State as a junior, during which he tied two NCAA all-division records by going 20-of-20 from the field. The 50 points broke both the OC and Heartland single-game scoring records.

Moon graduated from OC in April 2017 with a 3.937 grade-point average in accounting. In addition to the Academic All-America honors, he was a three-time recipient of the D2CCA Academic Achievement Award and was recognized on the NABC’s Honors Court three times. He made the Heartland’s academic Honor Roll President’s List every semester of his college career.