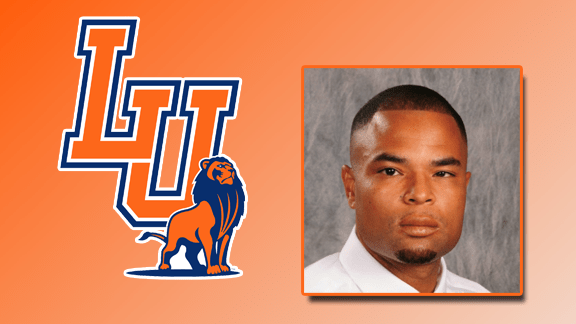 Quinton Morgan has been tabbed to take the head coaching position of the football team on an interim basis following the reassignment of coach Dwone Sanders.

Morgan has served on the Langston staff most recently as the co-defensive coordinator, and previously as the defensive backs coach and receivers coach.

Morgan was a two-sport athlete who came to Langston from Jackson State, where he played baseball and football. He transferred to Langston when the then-Jackson State defensive coordinator, Greg Johnson, took the job as the head coach of the Lions.

“I played by undergraduate years at Langston in 2004 an 2005,” Morgan said. “I actually played baseball my freshman year at Southern and transferred to Jackson State to finish off my baseball career.”

When Johnson took the position at Langston, Morgan said Johnson asked him to come with him, so he did.

“And look at what God led me to now.”

Sanders’ reassignment within the university came the day before last Saturday’s homecoming game against Southwestern Assemblies of God. Langston rallied late to come away with a 23-20 win, giving Morgan his first win.

“We jumped out to a 10-0 lead and instead of putting our foot on the gas, we eased up a little bit. We let them back into the game with a couple of penalties that basically killed drives offensively and kept their offense on the field longer, due to some penalties defensively.”

Another change for the football program has been the emergence of sophomore quarterback Norbert Ralph. He has shared time on the field with Mark Wright, Jr., a junior who has put up good numbers at Langston since he assumed the starting role as a freshman.

“We’ve just been going with a dual-quarterback situation,” Morgan said. “Basically, we’re feeding off the player. To be honest, we have two great athletic quarterbacks and both of them make great choices. And we’re just riding the hot player.

Wright was 13-of-22 passing for 136 yards and Ralph was 8-of-18 for 147 yards. Each threw an interception. It was the third game this season the Lions have shown the dual-quarterback look.

This is not the first time Morgan has stepped in when needed. In 2011, he assumed the interim head coaching position for the Langston softball team and finished the season at the helm.

But there will be more than one day for Morgan to prepare for this week’s football contest – a trip to Muskogee to face rival Bacone. Morgan said there will likely be a different look to the game plan, with a new person leading the charge.

“Everything is not going to be the same, of course, no two people are the same. And there are going to be a couple of things done differently this week, due to the fact that we have a full week to actually prepare.”

And there is also the fact that there will be familiar faces on the Bacone sideline.

“And when we prepare, you have to realize that our old offensive coordinator (Darryl Mason) and our old linebacker coach (Hank Campbell) are done there.

The Lions will go to Bacone with a 3-3 record and out of the NAIA rankings. There is work to be done, but Langston still has an outside chance to make the playoffs.

“That goal will never change,” Morgan said. “We’ve got the group of young men to do it. It’s our job as coaches to put these kids in the right places. That’s it.”

Kickoff is set for 2 p.m. on Saturday at the Indian Bowl in Muskogee.