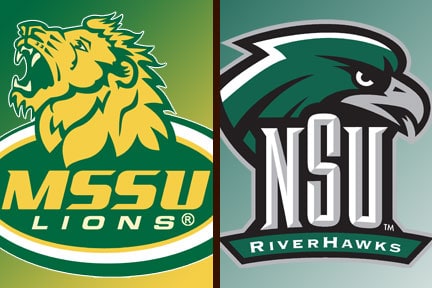 Northeastern State was led by a strong defensive effort from Darian Morris. The junior linebacker finished the contest with nine tackles, three pass breakups, two fumble recoveries, one interception, one tackle for loss and one half sack. He returned one of those fumbles 97 yards for a crucial touchdown early in the second half.

The Lions had marched all the way down to the NSU one-yard line on their opening possession of the third quarter, and they trailed just 14-7 at the time. The visitors faced a fourth-and-goal situation following two rush attempts for no gain. MSSU attempted to run the ball up the middle, but senior linebacker Irving Steele forced Will Gregory to fumble the ball. Morris then scooped up the loose ball and returned it 97 yards for the score. The play was the longest fumble recovery in school history.

MSSU was able to cut the NSU lead in half on its next possession when Terrell Crawford caught an eight-yard pass from Kyle Keller, but the RiverHawks marched 75 yards in just three minutes to push the lead back out to 28-14 with 4:23 left in the third quarter.

NSU tacked on a field goal early in the fourth quarter and held on for the 10-point triumph.

Senior running back Joel Rockmore carried the ball 25 times for 101 yards, giving him at least 100 yards rushing in each of the past two games.

Northeastern State will next hit the road for a battle against Central Missouri (5-2, 5-2 MIAA). The contest will be Homecoming for UCM and is scheduled to begin at 1:30 p.m. Oct. 24 in Warrensburg, Missouri.