Mother, student, athlete: Asheika Alexander found it all at Langston 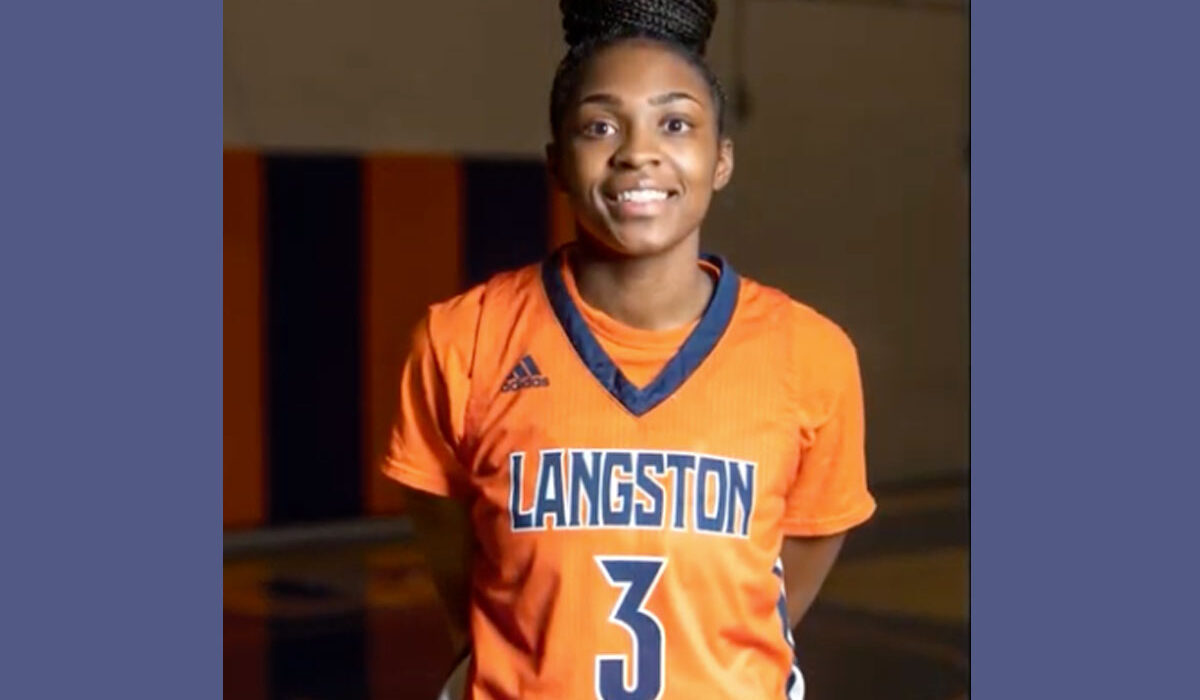 LANGSTON, Okla. – It took many stops along the way, but ultimately Asheika Alexander found a home at Langston University. The road from high school in Georgia Gwinnett County to rural Oklahoma took its twists and turns, but ultimately landing at the only historical black college in the Sooner State was the place she was always searching for.

Exiting high school, Asheika accepted a full scholarship to play NCAA Division I basketball at Marshall University. Her athletic career started out on a rocky foot when she was released from The Herd early in her sophomore year.

“I found myself at Grand Canyon University,” Alexander said. “Although I never played a game, I was around the program, practicing, and traveling a bit.” In May of that same year, her journey would hit another fork in the road.

“When I found out I was pregnant, it changed my outlook on many things. Having responsibility as a parent, I knew I needed a school that would allow me to keep my son with me at all times. I knew the upcoming struggles that were going to come with being an athlete, a student, and a mother.”

Being open with Grand Canyon and the coaching staff, she told the coaches the importance of having her son be a part of her journey. Expecting they would be understanding, Asheika’s world was once again rattled as she was released from a second program.

Out of school, missing basketball, and desiring to complete her degree, she turned to a resource that was in her pocket all along. Facebook. With it, she reconnected with a familiar face in Coach Terry Palmer, who had tried to lure Asheika to Langston fresh out of high school in 2016.

Her fortunes began to change as Coach Palmer reached out to her one day to check in on how things were going.

“I chose to be honest with him about being out of school, the challenges I have faced over the previous two years, and my son.”

Despite the struggles, her patience would once again be tested as Coach was on vacation. During the same time, other offers from the NCAA ranks at either the Division I or Division II came pouring in. But, her role as a new mother meant it was no longer just about basketball. I needed to have a relationship with the right coach. A coach that wouldn’t blink an eye with her desire to always put her child first.

“Asheika is probably one of the most humble and introspective people I have ever met, mature well beyond her years even as a young mother,” Terry Palmer, Langston University Assistant Coach, recounted. She has the ability to maximize the best of out of every situation and remain positive no matter what the outcome may be. Her story is one of the reasons why you stay in coaching because the truth is she is more inspirational to you than you are for her.”

The wait would be well worth it. Coach Palmer was very understanding about the situation with her son and things were set in motion for Asheika to finally attending Langston.

“Langston respected my wishes with bringing my son, and the transition was beautiful actually. Coming to the NAIA, it was about finding the community that was going to embrace me.”

Asheika started her journey with Langston in the 2019-20 season where she averaged just over 20 points per game and nearly seven rebounds as a junior. During her senior season, it increased to nearly 22 per contest which ranked her sixth in the nation.

“I knew Asheika was special from the first practice she had at Langston,” remarked Head Coach Elaine Powell. “I kept telling her, she has talent to make it to the next level, WNBA or FIBA, and each game is adding to her skills.”

The day I got the phone call from the Minnesota Lynx was a surprise. I did not know they were watching any of our games during the season.

Just like she has done many times before, Asheika rose to the challenge. She hit the hardwood for extra work alongside her coaching staff. They even arranged all the logistics regarding getting to the airport and watching over her son during training camp.

“All of the girls embraced me. I learned a lot from Coach Cheryl Reeve and Sylvia Fowles. They were more polite than I expected.”

That is not to say that the WBNA is easy. It was much more physical. Each player had a higher motor and was bigger, faster, and stronger than what she experienced in the NAIA.

“Ironically, our first exhibition game was against the Atlanta Dream – my hometown team. My family was able to see me play and I got to compete against Chennedy Carter, someone I had looked up to for a while.”

But the experience will no doubt help her this upcoming season. The Lynx taught her on a greater level that the details matter. Coming back to Langston with more experience on the court, and her bachelor’s degree accomplished in May, she is ready to get back to the grind with her fellow Lions. With one year of eligibility remaining, Asheika will pursue a master’s degree in the classroom and put into practice her “master’s course” in basketball from the WNBA this summer.

“I encourage anybody that wants to continue their athletic career and get a higher education to go for it! It is not always going to be perfect and ideal, but as long as you have a trust and communication with the coaches and professors, I think your experience can be a blessing.”

It took three stops, but she finally found her home.

“At Langston, it’s been a blessing of getting to come here, excel on and off the court, have a foundation with my son, grow as a woman and mother, and have amazing coaches impact my life.”