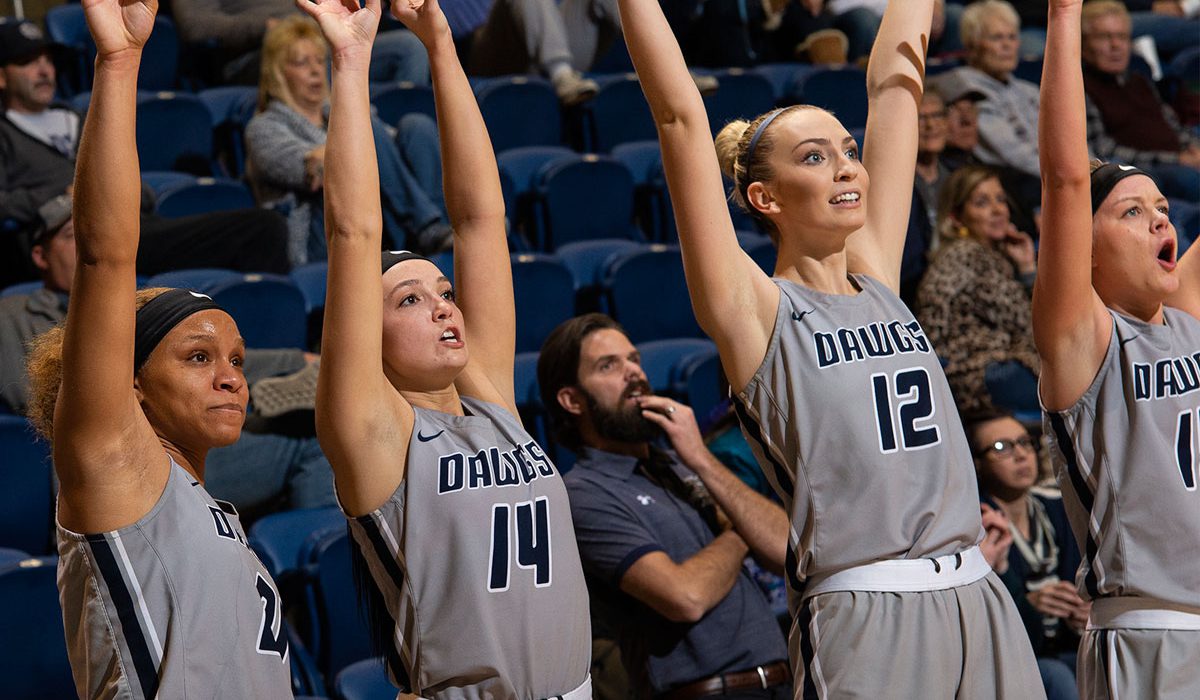 The Lady Bulldogs cheer one another on. Photo courtesy SWOSU Sports Info.

It is a record for the Southwestern women’s basketball team since making the move to the NCAA.

Southwestern put together a 47-game win streak in the NAIA during the 80’s.

One of the greatest women’s basketball players in Oklahoma history on the high school or college level, Kelli Litsch, is a SWOSU alum.

So it is not a stretch to think about greatness when Southwestern basketball is the topic of conversation.

In her 10th season at the helm, Oklahoma native Kelsi Musick has been instrumental in continuing the program’s winning ways. The Lady Dawgs, now 16-1 after dropping the season opener to Emporia State, look to be heading for their sixth 20-win season in the last eight years.

One of the interesting things about her teams is the wealth of in-state talent found when looking up and down the roster. Musick has been able to recruit well in western Oklahoma and throughout the Sooner State.

“I think that’s been important for us,” Musick said. “There was a time we weren’t able to do that. But we’ve built this program up and we’ve been able to keep some really good Oklahoma kids at home.

“It’s been nice because when you go somewhere, people know them. It’s nice to fill the stands with their family and friends and have the university get behind them at our home games, as well. I think it speaks highly of the talent in Oklahoma.

“We have some really good and high-quality players and I’m always fighting to keep them here.”

The current success is happening with the next wave of “Musickal” talent to come through Weatherford.

Nowadays, it is Hailey Tucker, Hayden Priddy and Tyra Aska headlining a crew that is bringing home win after win. And their goals are not small.

“In the past, I don’t know if we were ready to talk about it, but I feel like this year and with this group, big goals are something we’ve definitely talked about,” Musick said. “Obviously, we want to win the conference, but we have regional and national goals as well and I think it’s important that we address it so that everyone understands that we believe we can make this happen, if we do the right things.”

A team can more realistically speak about higher goals when it has what it takes to achieve them.

Tucker (Bartlesville H.S.) continues to climb the both the school and conference record books in many categories. Earlier this season, Tucker became the all-time leading scorer in GAC history. On Thursday, she became just the second player in SWOSU history to cross the 2,000-point mark, joining only Litsch in that achievement.

While she said she has a grasp of the history around her, Tucker said this group wants to continue to write their own.

“Coach talks about Fisher and people like that all the time that they started the program and we want to make a great run like them,” Tucker said. “We just want to do our own run. Me, Hayden, Katie (Percival), Savannah (Gray) – we’ve been here for a long time and we’re wanting to win.

“We’ve won the GAC regular season championship, which is great, but we haven’t won the conference tournament., you know. We want to continue this streak and we want to win that tournament. And then we want to host a region and ultimately go to the national championship.

“Bu knowing people like Michelle Fisher led the way before our time is pretty cool.”

Not everyone, though, who made her way to Weatherford knew about what she was going to be a part of before she arrived.

Early this season, Priddy (Piedmont H.S.) became the all-time leader in assists at SWOSU, which goes along with the more than 1,500 points she has amassed, as well. But she said that she wasn’t fully aware of the tradition at Southwestern before her arrival.

“I didn’t even know that I wanted to come to SWOSU until I had my visit,” Priddy said. “I hadn’t really done all my research.

“But tradition is really important here at SWOSU and especially women’s basketball here is western Oklahoma with Kelli Litsch who has come through and Valerie Farris and Michelle Fisher. So carrying on this tradition and being able to be in the record books with people like that is really awesome.”

Both Tucker and Priddy said having a roster that is so Oklahoma-centric makes for closeness and for support at home and on the road.

“I think there is a camaraderie there,” Priddy said. “We are all from Oklahoma and we know what it has to offer. Coach Musick and Coach (Cophie) Anderson always say, ‘We’ve recruited Oklahoma girls and it’s worked for us so far, so why should we change what we’re doing.’ It’s just kind of a cool thing that when we go places that we’re all from the same place.”

“It honestly helps with people coming to our games,” Tucker said. “We have a lot of people that travel with us and it’s a really, really great fan base. Coach Musick and Coach Anderson recruit girls from the state of Oklahoma and girls that may not have an opportunity to go out of state. It’s a super cool thing to keep girls here in Oklahoma and to keep girls to have a fan base like that.”

Musick pointed out that although Tucker and Priddy get a lot of the spotlight, it was nice to have five starters from Oklahoma.

“I have some girls from big schools and some from small schools,” Musick said. “And it just goes to show the talent level in Oklahoma and it’s nice when I’m able to keep them here and put them all together and they mesh so well in order for us to be so dynamic.”

As for now, this team seems to be enjoying the ride.

“Success is a wonderful thing as long as you treat it right,” Priddy said. “I’m very humbled by this team and humbled to get to play with everyone and I’m just enjoying every minute of it.”

Individual and team goals continue to be accomplished, but more remain.

“We’ve never won at Bartlesville,” Tucker said. “We’ve made it to the championship and then lost to Arkansas Tech our freshman year and made it to the semis a couple of times. It’s a goal for Hayden and I. You know what, it’s personal now. We’d like to win it.”

Musick noted that this team is special and that she appreciates the season in which she is taking part this year and all that has gone into it.

“I think they deserve to reap the benefits of all of their hard work. These seniors have been here for a long time and are leaving a legacy and it’s kind of nice to see that all their hard work is paying off.”