My summer in Hog Country 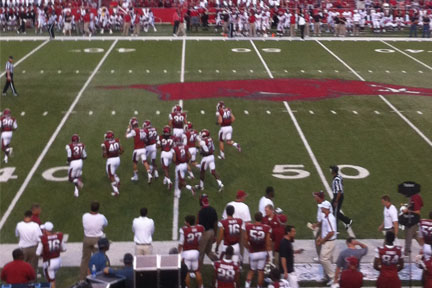 I grew up on the Oklahoma/Arkansas state line on the Oklahoma side. I was surrounded by Razorback fans all my life, my local news gave Arkansas scores instead of Oklahoma or Oklahoma State, but I never lived in the state until this summer.  I had an internship in Northwest Arkansas with about 12 University of Arkansas students.  And although I got my school credit with the internship, what I learned most was the passion and pride that sometimes borders the crazy that the entire state has for the Razorbacks.

Like most students loyal to their university we would talk and argue sports.  To talk to the majority of these fans going into the season Tyler Wilson should win the Heisman and the Hogs would be right in contention for an SEC title and possibly a National Title.

I do think if Wilson stayed healthy against UL-Monroe, Arkansas probably wins the game. But I’m here to tell you the outcome would not have been much different in the Alabama game. Arkansas might be in the same conference, but they don’t have the horses in the stable that Alabama and LSU have.  Also you can’t allow 35 points and let Gary Nova of Rutgers throw for almost 400 yards, it doesn’t matter what Division-I team you play, allowing those kind of numbers puts your offense in a deep rut.

All Hog fans want to talk about is the dominance of the SEC in recent years and I agree six straight National Champions can’t be wrong.  But I have a hard time putting Arkansas in the elite status of the SEC. They talked about how they killed the Big 12’s Kansas State in the Cotton Bowl; they won 29-16, far from a killing.  Had I been in Tuscaloosa, Baton Rouge, or even Gainesville I would have agreed with them, but for me, you have to build up some credentials before you start talking about being the class of a conference. Arkansas has one national championship from 1964 and that one was split with Alabama.

This year has not been anywhere close to what Hog fans were expecting, and I’ll be honest I didn’t see them losing against Monroe and Rutgers. I even thought going into the season that they could be a nine or ten win team with a tough schedule. But anyone who saw them play Jacksonville State knew that their defense would be in for a long season.

After the three early losses, Razorback fans are wanting to fire interim coach John L. Smith, and trust me he will be gone once the season ends. And yes, Bobby Petrino getting fired just before the season certainly did not help, but ultimately the coach isn’t the one on the field that has to make plays. The bottom line is that until Arkansas starts getting the players that the other top SEC teams get, they will be middle of the road in the SEC.