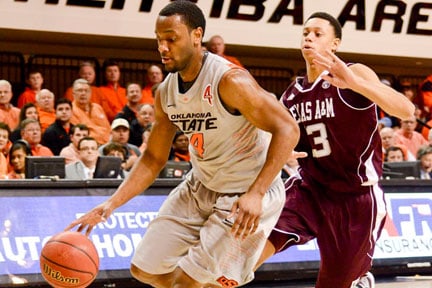 Oklahoma State opened the second half with a 17-5 run to extend a halftime lead and defeated Texas A&M 60-42.

Brian Williams led the way for the Cowboys (14-15, 7-9) with 17 points, 13 of which came in the second half.  Keiton Page and Markel Brown also scored in double figures with 15 and 12 points, respectively.

OSU split the scoring evenly between the first and second halves of play (29 and 31), but the defense stepped up big in the final 20 minutes, allowing especially for the game-changing stretch immediately after halftime.

Michael Cobbins and Philip Jurick did not have the big scoring outputs in this contest, but their presence was felt.  Each had big defensive rebounds and denied the Aggies more than one scoring opportunity per possession at key times.

Oklahoma State’s defense was impressive on the whole, holding the A&M to under 32 percent shooting on the afternoon.

OSU split the season series with Texas A&M, but won the final game between the two before the Aggies head off to the SEC next year.