Nash steps up big for Cowboys on offense … and defense 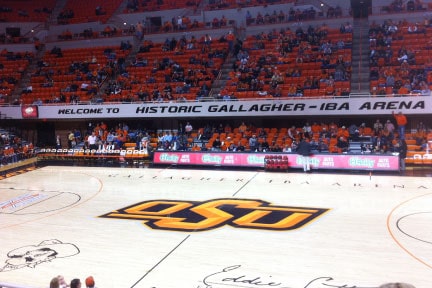 STILLWATER – There were moments Tuesday night when the Gallagher-Iba Arena crowd needed to be checked for a pulse, but with 4.7 seconds left in the game, Le’Bryan Nash revived it.

That was when Nash hit the game winning fade away jumper.  He then blocked Chris Allen’s layup attempt as time expired, giving Oklahoma State the 69-67 win against Iowa State.

The Cowboys win over the Cyclones avenged the loss from earlier in the season, when the Cowboys fell to the Cyclones in Ames on a last-second three by Scott Christopherson.

The Cyclones came back from eight down with just under five minutes left in the game.  The Cyclones were within two with 1:27 left when big man Royce White air-mailed one free-throw and drew back-iron on the other, missing an opportunity to tie the game.  However, White converted two free-throws to tie the game with 37 seconds left and OSU got the ball back.

With the game tied at 67 and one second left on the shot clock, the Cowboys gave the ball to Nash who hit the game winner and then swatted Allen’s last shot, clinching the game for the Cowboys.

Allen led all scorers with 22 points.  Markel Brown led the Cowboys with 19, while Nash finished with 18.

The Cowboys pull to 12-12 on the season and will take on the tenth ranked Kansas Jayhawks this Saturday.  The Cyclones are 17-7 on the year and host Texas A&M on Saturday.