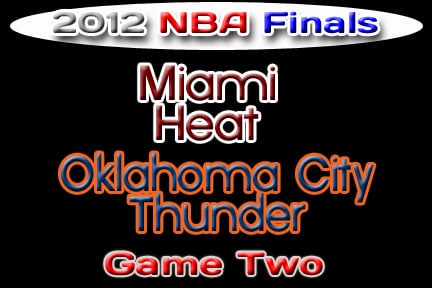 OKLAHOMA CITY – A furious comeback wasn’t enough Thursday night as the Miami Heat tied the series at one apiece with a 100-96 win in Oklahoma City.  The OKC Thunder lose at home for the first time this season in the playoffs.

Their past two games featured sizable Thunder deficits that they overcame in the second half to win, but that was not the case on Thursday night.  The Heat made adjustments after losing Game 1, and they jumped out to an early 18-2 lead in opening minutes of the first quarter.  Coach Erik Spoelstra inserted Christ Bosh into the starting lineup for the first time since his return from his abdominal injury in the Eastern Conference Semifinals.  Bosh contributed 16 of the Heat’s points and grabbed 15 rebounds.  LeBron James and Dwyane Wade combined for 56 points, and Shane Battier got hot, shooting 5-7 from long distance.  The Heat also improved on two areas that allowed the Thunder to get the better of them in Game 1.  Instead of 24-4 advantage for the Thunder in fast break points, the teams were more evenly matched, but the Thunder still had a 11-10 advantage.  They made their biggest adjustment, likely due to Bosh’s presence, in points in the paint, outscoring the Thunder 48-32.

In spite of all that, this game was very close at the end.  The Thunder trailed throughout, but they cut the lead to two points with 12 seconds left.  Derek Fisher inbounded the ball to Kevin Durant, who led the Thunder comeback by scoring 16 of his 32 points in the fourth quarter.  Durant beat LeBron James to the baseline and pulled up for a short jump shot, but he missed and Russell Westbrook was called for a loose ball foul that put James at the free throw line on the other end.  James hit both free throws to give the Heat a four point lead with only seven seconds to play.  Russell Westbrook threw up a prayer, but the Heat got the win.

Kevin Durant led his team with 32 points, in spite of scoring only six in the first half.  Russell Westbrook added 27 points and seven assists, and James Harden sparked the offense in the first quarter drought, scoring 10 of his 21 points in just over five minutes in the first quarter.  Serge Ibaka was more effective at blocking shots than in Game 1, contributing five of the team’s nine blocks.  Kendrick Perkins and Russell Westbrook each had 8 rebounds as well.  All of that was not enough to overcome their slow start that allowed the Heat to gain as much as a 17-point lead.  Kevin Durant was also playing in foul trouble.  He got two fouls in the first quarter, and he got his fifth with over 10 minutes to play in the fourth quarter, which limited how aggressive he could be on the defensive end.

The series is now tied at one, and the series shifts to Miami for Games 3, 4, and 5.  The Thunder will try to maintain their excellent record after losses in Game 3 on Sunday night.