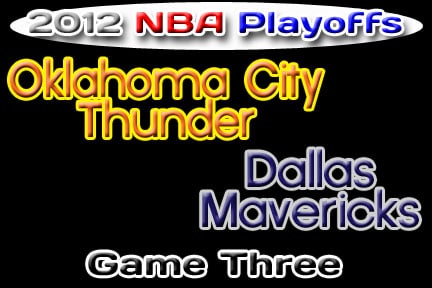 Game 3 of the playoff series between the Oklahoma City Thunder and the defending champion Dallas Mavericks looked nothing like the previous two games.  After two close games decided by a grand total of 4 points, the Thunder made it clear on Thursday night that they mean business in their 95-79 victory over the Mavs to go to 3-0 in the series.  No team in NBA history has overcome an 0-3 start in a playoff series.

From the outset it was obvious that the Thunder came to play.  After All-Star forward Kevin Durant struggled shooting the ball in OKC, he showed up in a big way in Dallas.  Durant shot 11/15 for 31 points, including 4/6 from long-distance.  Derek Fisher and Daequan Cook teamed up to add another 5 treys.  Russell Westbrook contributed 20 points on offense, and Serge Ibaka had a double-double with 10 points and 11 rebounds.

Defense, however, was where Thunder Coach Scott Brooks said the team really made a difference.  The Thunder held the Mavs to 34.2 percent shooting for the night, and Dirk Nowitzki scored only 17 points.  OKC also won the turnover battle, 8-16, something that had analysts concerned about the Thunder’s chances during the playoffs.

The series between the Thunder and Mavs has proven to be exciting in each game, and the same was true last night in spite of the score.  The referees handed out 5 technical fouls, 4 to the Mavericks, including one to Mavericks Head Coach Rick Carlisle in the closing minutes of the first quarter.  As the roles are reversed from last year’s Western Conference Finals, a young rivalry seems to be developing between these two teams.  The next chapter will be written tomorrow night at 6:30 p.m. in Dallas when the Thunder gets the chance to close out the series and sweep the Mavericks with a win.