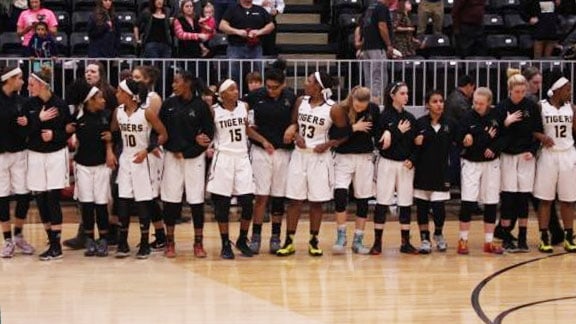 The Broken Arrow girls basketball team is poised to make another playoff run in 2016-17. With basketball season right around the corner, the Lady Tigers are excited about Tiffany Jones taking the reins in her first season as head coach.

Jones was a big contributor in Broken Arrow’s two state championships as an assistant coach, and senior Angelica Cuellar is confident that the coaching change won’t take much adjusting.

“I feel like she was always the head coach,” said Cuellar. “So not much adjusting will be needed.”

There is no doubt that Broken Arrow is going to be a competitor this season. However, the change of scenery in a new coaching staff and new players will issue inherent challenges that the team will have to overcome.

Assistant coach Randi Pawpa knows that coach Jones understands this team and knows exactly how the team should prepare in order to build another successful season.

“We want to outwork our opponents and we are going to play smarter than our opponents,” Pawpa said. “Jones is not a screamer, but she expects your best.”

Coach Jones has always been a positive influence on the Lady Tigers, and the team and coaches expect her to have an even bigger impact on the girls as a head coach. Cuellar appreciates her care and passion she has for the team, and her efforts to always have a relationship with every player.

“Her players know she cares and wants them to succeed both on and off the court,” Pawpa said.

All in all, the Lady Tigers have a lot to be excited about this winter. They’re bringing back an experienced starting lineup and, of course, a seasoned coaching staff.

“We expect to continue to be one of the best programs in the state,” Jones said. “We have a lot of new faces, younger players, and we are working hard to get ready for the season.”

This story was originally published on bahspulse.com and was republished with permission.