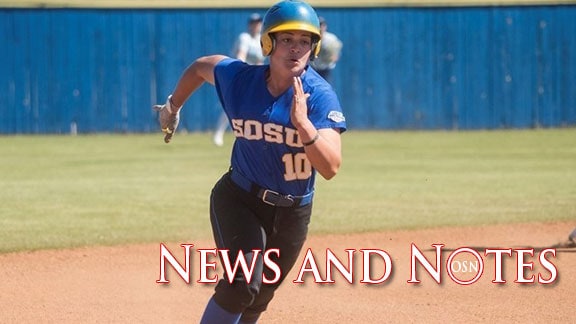 ∗ Southeastern will have Courtney Riddle in the dugout once again this spring. The Storm has announced the hiring of the Storm softball great as the program’s assistant coach.

“We are excited to add her to the staff,” said Faubion. “She is one of the hardest workers we’ve ever had in the system and she will be able to connect with the players very easily.”

A native of Irving, Texas, Rogers, who played under her maiden name of Riddle before marrying over the summer, played outfield for the Savage Storm (2013-2016) and played in 190 games, starting 174 of them in her four-year career as the team compiled 151 wins, a pair of GAC championships and a third-place finish at the NCAA Finals. She was an All-Central Region selection in 2013 and earned a pair of All-GAC honors.

She received her degree in health, physical education and recreation in 2016 and shortly after married her husband Logan and the couple live in Durant.

Morris will direct and manage all aspects of Game Operations and Event Management for the Oklahoma Wesleyan athletic department. He will also continue his duties as sports information director for the University.

“I am both honored and humbled to continue being apart of the fantastic team that vice president John Means and athletic director Mark Molder have assembled,” Morris said.

“This represents a tremendous opportunity for me to grow with the university. I look forward to the new challenges presented by the expansion of my duties.”

Prior to his most recent position as Associate Athletic Director – Game Operations/Sports Information Director, Morris has spent this past 2015-2016 year as the Sports Information Director and Assistant Women’s Basketball Coach at Oklahoma Wesleyan. Before receiving these positions at Oklahoma Wesleyan in 2015, Morris was a Graduate Assistant Coach for the Women’s Basketball team at Southwestern College (KS) for two years.