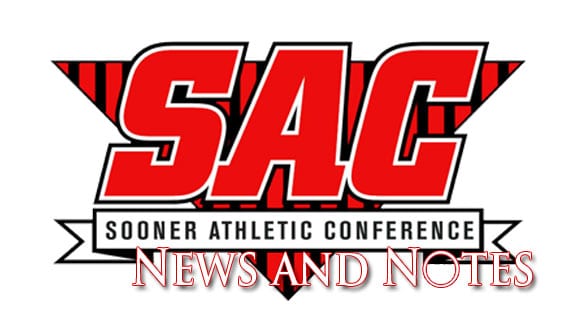 ∗ A pair of second half goals pushed the Oral Roberts men’s soccer team past USAO 2-0 in an exhibition match Thursday night at the Case Soccer Complex.

ORU finally broke the scoreless match in the 68th minute as Alexis Derennes got behind the defense. His shot was blocked but Matthew Rogers was there to clean it up and put ORU on top. The Golden Eagles added to the lead in the 74th minute as Thibault Le Duigou slid a pass through to Junior Chavez who put it away.

The 2017 SAC basketball tournaments will introduce a new format. The tournament quarterfinals will be Feb. 28 on campus sites hosted by the higher seed. The tournament semifinals and championships will be March 3-4at OCU. Previously, the entire tournament took place at the same host site.

“We are excited to host the 2017 Sooner Athletic Conference basketball tournaments,” OCU athletic director Jim Abbott said. “We look forward to having teams and fans from around the conference on campus and appreciate the opportunity we have to positively impact the Oklahoma City economy with this great event.”