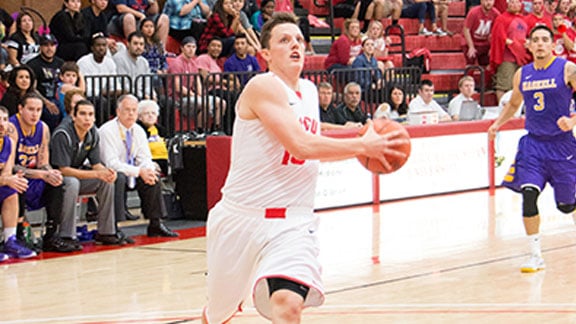 OKLAHOMA CITY — The top-ranked Mid-America Christian University Evangels cruised to a 127-56 victory over the Kansas Christian College Falcons today inside the Gaulke Activity Center. The 127 point total is the most for the Evangels since joining the NAIA in 2007.

It’s already the second time this season the Evangels have eclipsed their highest-point total, with the first coming in a 123-93 win over Philander Smith (Oct. 28).

The record 127 points was fueled by a 17-of-34 shooting clip from the perimeter, the most threes for the Evangels as an NAIA school.

This wasn’t quite a wire-to-wire victory, but it was close as the Falcons’ only lead came at 4-3 at the 18:37 mark of the first half.

The Evangels completely took over from there, as Olajuwon Garner nailed a three to ignite a 14-0 burst that put MACU up 17-4.

After the Falcons twice fought back within nine, the flood gates opened with a 31-6 run that stretched the lead to 55-20 and the Evangels carried a comfortable 66-24 lead into the break.

The Evangels continued the onslaught in the second half, continuing to expand the lead until reaching a game-high edge of 75 points on a bucket by Dustin Welch that made it 127-52 with 1:45 left.

Garner led the Evangels (5-1) with a game-high 24 points, shooting 7-of-8 overall and a perfect 6-of-6 from three-point distance.

Trey Slate put in a career performance of 22 points and hit a career-high 7-of-11 from the perimeter.

Jamal Holt recorded a team-high 17 points to lead the Falcons and had six boards. Darwin James had 13 points and six rebounds, while Joshua Walker chipped in with 12 points.

MACU will then return home and host Wiley College next Tuesday (Nov. 29) at 7 pm inside the Gaulke Activity Center.