No. 1 vs. No. 2 softball matchup first in Oklahoma this millennium 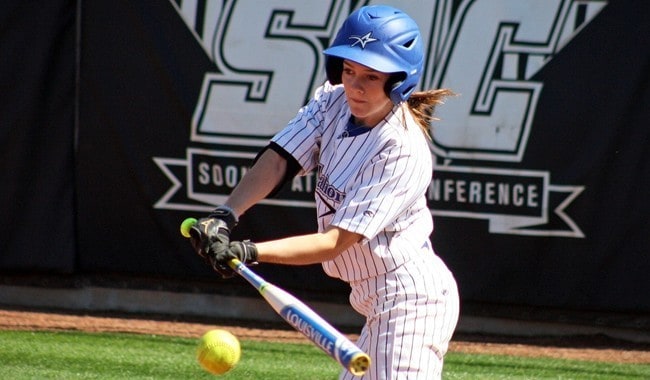 The NAIA Top 25 rankings came out just before first pitch in Oklahoma City on Tuesday, confirming what many thought would be the case.

Two-time defending national champion Auburn-Montgomery (Ala.), which had been No. 2 last week, but had been swept (and shutout) in a doubleheader on Saturday, had fallen to the third in the poll.

This gave the opportunity for St. Gregory’s to move up one spot this week, setting a 1 vs. 2 matchup vs. OCU.

It marked the first time since 2000 that Oklahoma had hosted a battle of the top two teams in the country and both hailed from within the Sooner State’s borders. (NAIA ranking records are reliable only through 2000.)

No. 1 Oklahoma City won both games of the doubleheader on Tuesday in Ann Lacy Stadium, beating No. 2 St. Gregory’s 11-2, 11-0. Stars’ senior Leslie Miller hit two home runs and drove in six RBIs on the evening.

This was the first time this season the Cavaliers have lost consecutive games in 2016. OCU runs its win streak to 17.

It was the highest combined ranking for a softball matchup in the state since then – No. 1 Oklahoma City defeated then No. 5 Oklahoma Christian, 4-0 in 2002.

SGU (33-5) has reached the highest NAIA national ranking in school history for any sport. It tops the No. 3 mark from last week and 2008 in softball. The men’s soccer team was also ranked third in the country in 2000.

The last time the NAIA’s No. 1 met No. 2 was eight years ago when top-ranked California Baptist split a doubleheader at No. 2 Point Loma Nazarene on Apr. 5, 2008.